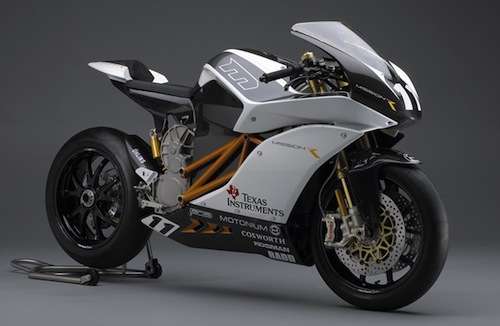 Jay Leno invited the team from Mission Motors to his garage to learn about the Mission-R electric motorcycle and took it for a spin.
Advertisement

It’s no secret that Jay Leno loves cars and has a stable of over 100 classic and collectable cars in his garage, but he also has over 100 motorcycles in his collection. So it was only natural for Leno to invite the team from Mission Motors over to learn more about the companies Mission-R electric motorcycle and its technology. Jay Leno is no stranger to electric bikes either, as he has a stable of two-wheel machines, both internal-combustion and EV.

Mission Motors is an up-and-coming electric vehicle company that has created the most advanced production electric motorcycle in the world. Located in San Francisco, California, the company has assembled some of the brightest young engineers on the planet. The elite team has expertise in the areas of powersports, automotive, robotics, battery and software industries.

They then use that knowledge to develop technologies that maximize the potential of the electric drivetrain. Their stated goal is to redefine the world of electric vehicle performance. When you look at the Mission-R electric superbike they developed, you begin to see what this company is all about.

Mission Motors developed the Mission-R electric superbike to be their performance development platform to show what they can do in the area of two-wheel performance. It is one of the most advanced motorcycles in the world and can perform with some of the fastest bikes in AMA Pro Supersport motorcycle racing.

The most advanced EV technology on two wheels

The machine uses 14-kWh lithium-ion batteries paired with a 120-kilowatt motor, that produces an incredible 161 horsepower. Mission Motors says the powertrain will propel the Mission-R superbike to 60 mph in around three seconds with a top speed of over 160 mph. Now that will get Jay Leno’s heart pumping. The electric superbike weighs in at around 550 pounds and gives the rider a range of 80-100 miles. Mission Motors pursued the development of a race bike because of the challenges the platform presents. They had to keep the motorcycle lightweight even with the massive battery packs and still serve up impressive performance.

With 14kwh of energy storage and a 100kw AC induction motor, Mission Motors says they have packaged nearly 90% of a Chevy Volt’s power and energy into the compact superbike. The custom chassis with its braking and cornering ability are as good as the leading ICE sportbikes.

The Mission R won the 2011 FIM/TTXGP U.S. Grand Prix at Laguna Seca, finishing the 8-lap race 39.9 seconds ahead of the second-place finisher. Rider Steve Rapp’s qualifying lap time of 1:31.3 broke all previous electric vehicle records at Laguna Seca. Had the Mission R been competing in the weekend’s gasoline-powered AMA Pro Supersport category, it would have qualified in 5th place.

We will be hearing more about the Mission-R electric superbike in the future as they continue to show what this new technology can do on the track. Unfortunately, the Mission-R is not for sale.

Watch the informative video below.

Aaron Turpen wrote on May 15, 2012 - 5:42pm Permalink
This is one of a handful of really cool racing electrics in the motorcycle arena. I'm a big fan of this new genre and have followed awesome bikes like the KillaCycle, TTXGP racers, Xero, etc. Two points, though: MIssion doesn't produce motorcycles nor do they plan to. They make parts and one-off bikes for racing and the R is their current test machine. Also, the MIssion-R would never have been able to compete against gasoline-powered racers because it has a range of only about 26-28 miles in a race (moto races are usually about double that). Otherwise... yet again I have reason to be jealous of Jay Leno. :)