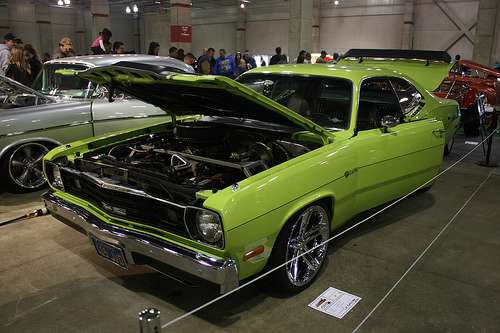 Jay Leno talks about his 1000 horsepower 426 Hemi 1975 Plymouth Duster that he has added to his already fabulous collection.
Advertisement

Paul Annunziata wanted to make sure his prized Plymouth Duster went to a good home before he passed away, and asked his old buddy Jay Leno if he would be interested. There was only one stipulation, Leno would have to agree to never sell the car. Leno being the car lover that he is, agreed to the deal and now owns the very special one-of-a-kind hot rod.

Annunziata and Leno knew each other since they were kids and worked at the same auto dealership. So it was only natural that Annunziata contacted Jay Leno and wanted to give him the car. Leno didn't want to just take it, so they arranged to donate the purchase price of the car as a scholarship fund to McPherson College, which offers four-year programs in automotive restoration and mechanics.

Now the supercharged 426 Hemi-engined Plymouth Duster built by mechanic and racer Paul Annunziata, sits in Leno’s "Big Dog Garage" in Burbank CA. The car is housed with Leno’s extensive collection in an industrial park which comprises three adjacent warehouses. At last count he had close to 100 cars and 100 motorcycles in his collection. His private auto and motorcycle collection is run by Bernard Juchli and one other mechanic.

Some of Leno’s other cars include a 1986 Countach which is one of his daily drivers with over 70,000 miles on it. That sort of mileage is almost unheard of on any Italian exotic. One that doesn’t get much use is his 1909 Stanley Steamer and is just one of many steam engined cars that Jay owns.

Jay owns a very fuel-efficient car, his 1937 Topolino only has a five gallon fuel tank, but it’s able to get almost 40 miles to the gallon. The downside is that the Topolino does not get you to a destination quickly with a top speed of 53 mph.

A car that he owns that is fast is his 2007 Ariel Atom. Built in Britain, the ultra-lightweight car is a road weapon that can accelerate as quickly as superbikes. Leno's Atom is powered by a GM Ecotec motor putting out around 300 hp, weighs under 1400 pounds and is unbelievably quick.

His McLaren F1 is the engineers dream car, and was designed by famed Formula One designer Gordon Murray. He spared no expense and used gold lines in the engine compartment as a heat reflector. An iconic car in Leno’s collection is his Mercedes 300SL Gullwing. The swooping lines, racing success, and unique doors were all parts of what made the SL legendary.

Annunziata recently died of lung cancer, but before he did, he made this video. Watch Paul's own history of Leno’s newest addition and see what he’s done to keep Paul's dream car on the road.

Toyota's First EV Will Have a Name of BZ: Toyota BZ
First Videos From Inside The Boring Company's Las Vegas Loop
END_OF_DOCUMENT_TOKEN_TO_BE_REPLACED