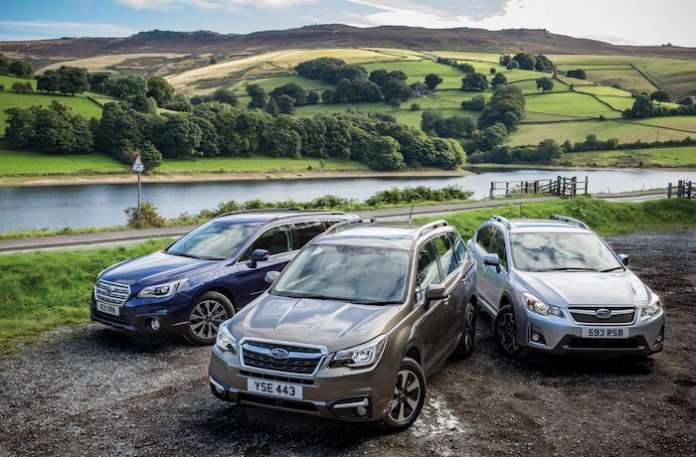 How Tiny Subaru Becomes The Big Enchilada Among Automakers

Subaru has an incredible success streak going. How do they keep beating all other automakers?
Advertisement

Subaru may not be the biggest fish in the sea, but they are the big enchilada when it comes to growth and sustaining a successful run. Subaru of America is only one of four automakers who were up in July, and they had the largest percentage among all automakers. Their new Outback wagon, Forester SUV and 2018 Crosstrek crossover lead the way for their all-wheel-drive lineup.

According to autmobilemag.com, Most automakers were down for the month of July. Here’s the numbers. General Motors: off 15.4 percent. Ford Motor Company: off 7.5 percent. FiatChrysler: off 10 percent. American Honda, off 1.2 percent. Nissan Group: off 3.2 percent. Kia: off 5.9 percent. Hyundai: off 28 percent. Mercedes-Benz USA: off 10.7 percent. Volkswagen: off 5.8 percent. Mazda: off 3 percent. BMW Group: off 13.7 percent. Jaguar/Land Rover: off 4 percent. Volvo: off 18.8 percent.

There were only four automakers who were up and Subaru leads those manufacturers posting gains for July. Here’s the numbers. Subaru: up 6.9 percent, Toyota Motor Corporation: up 3.6 percent, Mitsubishi: up 1.7 percent, and Porsche: up 0.6 percent. And this is not new for Subaru.

Subaru is on a winning streak like no other

Subaru of America has a streak of success like no other automaker. The Cherry Hill, NJ automaker has seen nine consecutive years of sales growth, and if it were sports, that’s a dynasty for any team. They’ve also seen 68 consecutive months of increased sales in the U.S., and there appears to be no end in sight. In 2017, Subaru plans to see another 9 percent increase in sales, despite a plateauing overall market.

It’s their niche brand of all-wheel-drive vehicles that are driving Subaru’s impressive achievements. They have the top-selling 2017 Subaru Outback wagon, followed by the Forester SUV and Crosstrek crossover leading the way. Subaru sold 615,132 new cars in 2016, up 5.6 percent over 2015. That’s more than Acura, Audi, BMW, Buick, Chrysler and Volvo sold separately. While they aren’t even close to their Japanese rivals, Honda, Nissan and Toyota, they aren’t a small boutique brand that no one has heard of.

Subaru is pulling off what no other automaker has been able to accomplish. They are cashing in on the market shift to crossovers and have an all-wheel-drive lineup with a “go-anywhere” attitude. They stay connected to their loyal customers, they are attracting new buyers to the brand at an impressive clip, and bringing out new products that are designed only for the U.S. market. Subaru will launch a new 2018 Ascent 3-Row Crossover next year and it will be built in the U.S. at their Lafayette, Indiana plant. Subaru’s long streak of continued growth has to stop sometime, but it won’t be anytime soon. The new Outback, Forester and all-new 2018 Crosstrek will continue to be popular offerings for adventurous families.

J wrote on August 14, 2017 - 4:26pm Permalink
I've had my WRX for a year now and I am impressed with all the ways Subaru continues to engage me as an owner. Magazines, videos, emails, coupons...It seems like they contact me one way or another several times a month. It is like they want me as a repeat buyer and are willing to work for it.
Denis Flierl wrote on August 15, 2017 - 11:42am Permalink
Thanks for the insights into how Subaru connects to owners J!
JP wrote on August 28, 2017 - 2:37pm Permalink
I own a WRX and am planning on seriously considering the Ascent for my wife. When in 2018 do you think it'll be available? Also a little confused as you referred to the Forester as an SUV but the Ascent a crossover (CUV). Won't the Ascent be larger than the Forester? And how big does a vehicle need to be to be considered an "SUV"? Surely doesn't have to be Yukon size for that designation, no?