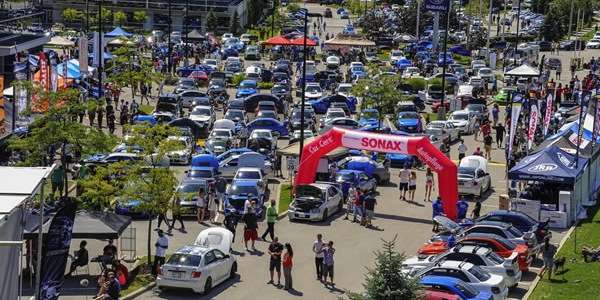 How Subaru WRX/STI fans celebrate their shared passion of ownership

Subaru WRX/STI fans in Canada came out in big numbers for the 12th Annual HyperMeeting. What charity are they also passionate about?
Advertisement

Subaru WRX/STI performance fans are a passionate bunch when it comes to their cars. They came out in a big way to the 12th Annual HyperMeeting put on by the Toronto Subaru Club (TSC). It’s the largest enthusiast club of its kind with nearly 11,000 members from Toronto and its surrounding areas. Last weekend, there were over 800 Subaru vehicles and well over 1,000 people who met at the 12th Annual HyperMeeting to celebrate their shared passion of Subaru ownership.

There was an array of other Subaru models beyond the popular WRX/STI also at the event, but it was WRX/STI enthusiasts with the largest number of attendees. BRZ fans also showed up in big numbers for the event that was held at Subaru’s corporate head office in Canada. They gather to show off their performance cars, but it’s also a community event to help raise funds for Ronald McDonald House Charities (RMHC).

Each year, the annual HyperMeeting raises funds for RMHC Toronto, as it is Subaru Canada Inc (SCI) and TSC’s charity of choice. This year a total of $20,000 was raised for RMHC Toronto by TSC, an amount matched dollar-for-dollar by SCI for a grand total of $40,000.

The annual family-friendly event is designed to appeal to a younger generation of Subaru WRX/STI enthusiasts and offered a barbecue, photo booth and various other fun attractions. The event featured a vehicle covered in chalk paint to be fully decorated, r/c cars, superhero characters, face painting, a balloon artist and a magician.

The community-oriented Toronto Subaru Club hosts many events and meets as a way for WRX/STI and all Subaru enthusiasts to socialize and mingle. They also help children who are undergoing life-saving medical treatment. Shiro Ohta, chairman, president and CEO of Subaru Canada, Inc. said, “RMHC Toronto provides a home away from home for seriously ill children and their families.”