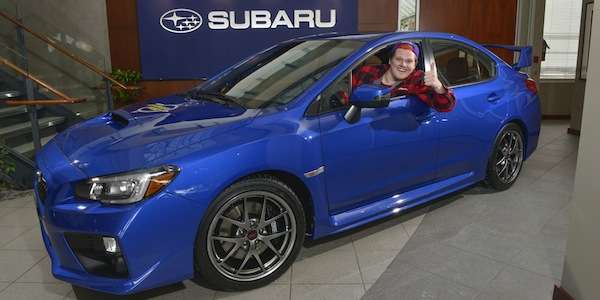 Subaru Canada gives away a new 2015 WRX STI. What did this lucky winner have to do to be given the keys to the performance car?
Advertisement

Subaru Canada gave auto enthusiasts a lot more incentive to check out their new vehicles at the Canadian International Auto Show in February. Subaru Canada, Inc. (SCI), together with the Ontario Dealer Advertising Association gave away a new 2015 Subaru WRX STI equipped with the Sport-tech Package to Satchel Ives of Toronto, Ontario.

What did the lucky winner have to do to drive away in the STI?

Ives won the Subaru STI performance sedan as the grand prize of the Subaru Scavenger Hunt. The contest took place at the 2015 Canadian International Auto Show in Toronto, Ontario last month. The contest was an app-based game where participants had to identify special Subaru clues that were located throughout the show. Participants then answered Subaru trivia questions that engaged social media through Facebook and Twitter.

As contestants found each new checkpoint, they scanned a QR code leading to the next trivia question. Each correct answer equalled one entry for the grand prize and daily prizes. Participants could earn 10 chances to win by correctly completing and answering all 10 questions.

Ives walked away with the 2015 Subaru WRX STI Sport-tech Package that was the top draw. “This is amazing and I can’t thank Subaru enough,” said Ives. “If I was in a financial position to buy a car right now, I’d definitely choose to buy this one. The first thing I’m going to do is take my girlfriend for a drive!”

The promotion is a huge success for Subaru

This was the first time Subaru has featured a promotion like this at an auto show. It was a brilliant idea and SCI said the scavenger hunt using smartphone technology and a specially created app directly engaged over 13,000 people over the 10-day show through either the app or microsite. Satchel Ives is sure happy the top prize was the iconic 2015 Subaru WRX STI performance sedan.

Wilkins Capacetti wrote on March 8, 2015 - 5:47am Permalink
Well what can I say I love the way Subaru's handle and if my credit was good enough to get. I would grab one and not even traded in because to me it's a lifetime car.