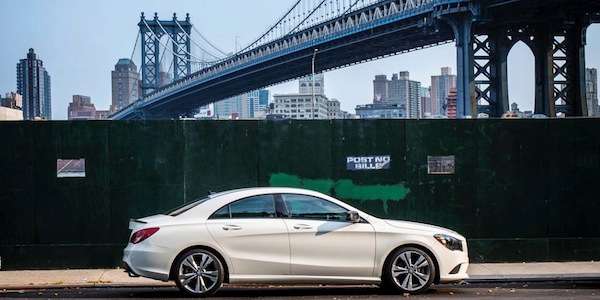 The 2014 Mercedes CLA-Class is the hottest new offering from the German automaker. What sets it apart?
Advertisement

The new 2014 Mercedes-Benz CLA-Class is the hottest new offering for the German automaker. According to IHS Automotive, the new CLA four door coupe is doing something that has never been done before by the luxury automaker. The new CLA is bringing in new buyers who have never purchased a Mercedes-Benz car before.

IHS Automotive says, an analysis of Polk new vehicle registration data indicates that the 2014 Mercedes-Benz CLA-Class is succeeding in this effort to be a “conquest” vehicle for the German automaker and is bringing in non-luxury drivers to Mercedes showrooms. The CLA appears on this list long with some other surprising cars that we wouldn’t think would be considered a conquest vehicle.

Mercedes-Benz planned on the CLA-Class to be a target for new buyers who had never considered the luxury brand before and it’s working in a big way. The new smaller, more affordable ($29,900 before destination) CLA-Class is clearly meant to bring young new buyers into the brand. Mercedes-Benz is targeting the young successful millennial generation (25-35 years) who is now out of college and starting to build a new career. Most of the CLA-Class shoppers are new to Mercedes.

Mercedes-Benz U.S. president Steve Cannon told Automobile magazine, “With the CLA-Class, we're really reaching an audience that we hadn't reached before. As the car's buyers are on average ten years younger than the traditional Mercedes-Benz shopper. This was what Mercedes was hoping would happens as the CLA draws a new younger buyer into dealer showrooms.

What other conquest vehicles are on the Polk list?

The new 2014 Mercedes-Benz CLA-Class is the hottest new offering from the German automaker. The new CLA compact four door coupe is doing something that has never been done before by the luxury automaker. The new CLA is a conquest vehicle for the brand and is bringing in new buyers who have never purchased a Mercedes-Benz product before. It’s in the top ten models with the highest conquests from non-luxury segments. It seems to be working well for Mercedes.