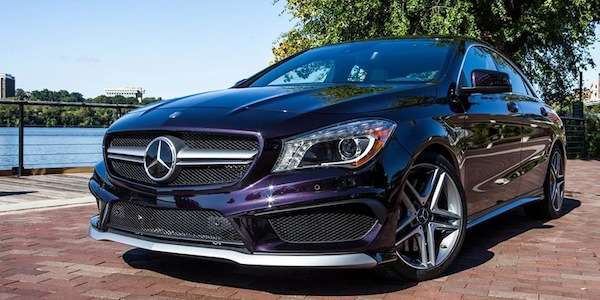 The all-new 2014 Mercedes-Benz CLA-Class is a great value for a luxury car, but it’s also one of the best looking cars Mercedes has produced. The 2014 Mercedes CLA250 has an MSRP starting at $29,900 plus $925 destination. But there’s more than just price that is attracting a new buyer to the Mercedes brand. Yes, it comes with a plethora of standard features, but it’s the styling that is grabbing the attention of a new generation of buyers.

The all-new 2014 Mercedes-Benz CLA Class is called the “style rebel” and is aimed at attracting a new generation of buyers. Mercedes is succeeding in a big way and can’t keep up with the demand for the new four-door coupe. It’s styling is getting attention with buyers all over the globe. Its progressive and dynamic design is giving the Mercedes-Benz CLA a clear advantage over the competition.

Last year, a competition was held by German motoring magazine "auto, motor und sport" and 17,680 readers cast their votes in this year's Autonis design awards. The CLA took top honors for the title of best new design product of 2013 in the compact car class. And buyers can make it even better looking with the Sport Package or stepping up to the performance CLA45 AMG.

The exterior and interior design is different than anything Mercedes has produced in the past. The CLA’s progressive sporty appearance is seen on the outside and also inside the cabin. Dr Dieter Zetsche, Chairman of the Board of Management at Daimler AG and Head of Mercedes-Benz Cars said in an interview, "We are transferring the expressive design of the Concept Style Coupe seamlessly into series production. With its unmistakable design idiom, I am convinced that the CLA will significantly form the Mercedes-Benz brand image."

There are some cars that stand out from the crowd, and the Mercedes-Benz CLA-Class is one of those cars. With its four-door coupe design language, CLA could be a car that is destined to be a future design icon. When Mercedes took the design language from the Concept Style Coupe, they intended to reach a new target group of buyers with the CLA Class, mainly those who never would have considered buying a Mercedes-Benz, and it’s working.

The new CLA gets design cues that is transforming the brand, and it will be the lead model in what the brand looks like going into the future. The 2014 Mercedes-Benz CLA-Class is a resounding success as the German automaker attracts a new younger buyer to the brand with its attractive price, standard features, high-tech features and above all, its sexy styling.

Stay tuned to Torque News as we talk to a CLA45 AMG owner and get his impressions of the performance four-door coupe with the world’s most powerful four-cylinder engine.