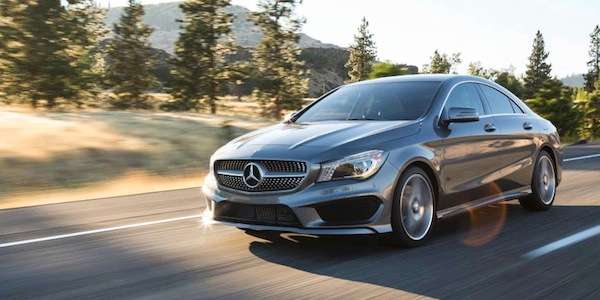 Can any automaker top what 2014 Mercedes CLA-Class is doing?

Mercedes-Benz USA today reported the highest first quarter sales in its history with 30,091 vehicles sold across the Mercedes-Benz lineup. The all-new 2014 CLA-Class is a big reason.
Advertisement

The all-new 2014 Mercedes-Benz CLA-Class is moving out of dealer showrooms at a fast pace. The new four-door coupe is helping Mercedes-Benz reach never before seen sales numbers here in the U.S. and around the globe. The German brand hit a new benchmark for the month with sales of 27,401, an increase of 11.2%, while year-to-date volumes climbed to 72,614 units, up 5% from March 2013.

And the new 2014 Mercedes-Benz CLA Class is a big reason. "Thanks to a best-ever March, we've hit a new first quarter sales record in 2014," said Steve Cannon, president and CEO of MBUSA. "Our CLA is making strong headway in the entry luxury arena with sales of more than 20,000 units after just six months on the market."

As a whole, retail volumes for Mercedes-Benz passenger cars were up 8.8% in the first quarter of 2014, boosted by sales of the 2014 CLA-Class four-door coupe with 6,129 units year-to-date.The CLA-Class compact four-door coupe is making waves all over the world and could overtake the top selling C-Class as Mercedes’ most successful car.

The all-new 2014 Mercedes-Benz CLA Class is called the “style rebel” and is aimed at attracting a new generation of buyers. Mercedes is succeeding in a big way, and the new four-door coupe styling is getting global attention. Buyers around the globe are snatching up the CLA faster than Mercedes-Benz can build them.

Response for the all-new Mercedes-Benz CLA-Class shows that the four-door coupe is a resounding success. Mercedes-Benz dealers were notified in December that supplies would be tight for the new CLA-Class four-door coupe. Younger buyers are being lured into Mercedes showrooms with the new stylish car from the German automaker and they are responding in a big way. Bloomberg Luxury is reporting that dealers have been notified that they should expect fewer deliveries of the new CLA in the first half of 2014.

Mercedes launched the new CLA-Class here in the U.S. in November last year with a price of $29,900 and it’s a good price point for the new four-door coupe. And it’s raising the level of sales across the lineup for all Mercedes cars. Even if buyers aren’t interested in the CLA, they are purchasing other models. The new CLA is offering buyers the ability to get a premium car at sub-premium prices.

It looks like Mercedes-Benz has hit a home run with the new CLA-Class as a younger buyer is being attracted to the brand. Can any other automaker come up with a car that will compete with the 2014 Mercedes CLA-Class?