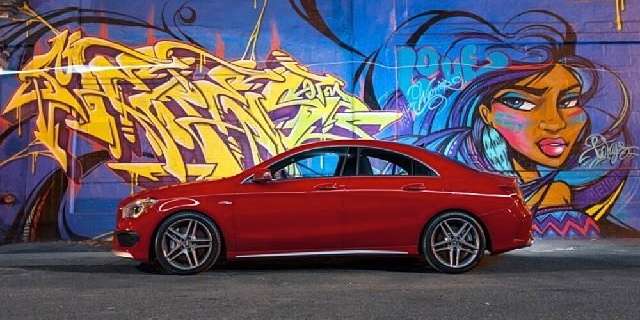 The all-new 2014 Mercedes-Benz CLA-Class is the third vehicle in the compact car family and is appealing to a new generation of buyers. What is a so appealing about the new four-door coupe?
Advertisement

A new generation of buyers has found out about the all-new 2014 Mercedes-Benz CLA-Class and they like what they see. In April 2013, Mercedes-Benz introduced the new CLA compact luxury car with its four-door coupe styling, and buyers took notice. But these buyers are not the seasoned group the German automaker has typically attracted in the past. A new younger buyer that is over a decade younger, and many much younger than the median age of 57 for the brand, are buying the new CLA. How was Mercedes able to change gears so quickly?

It may look like like it happened overnight, but Mercedes had a plan and it’s working well. Mercedes has a growth strategy that included appealing to a younger buyer who has never purchased a Mercedes car before. The CLA-Class is the third vehicle in the compact car family that Mercedes has launched. The CLA has a starting price of $29,900 and it’s a big reason Mercedes is seeing the CLA selling extremely well.

In April 2013, Mercedes-Benz introduced the new CLA compact luxury car to the European market, and then launched the four-door coupe in the U.S. on September 20. The new stylish coupe has quickly become a top seller around the globe. In less than four months, over 12,000 CLAs were delivered to U.S. customers. Steve Cannon, head of Mercedes’s U.S. sales said, “This is our best launch in 20 years. The CLA has been a phenomenal success right out of the gate.”

Is it just price, or this there more that is appealing? It starts on the outside with the new coupe styling. Mercedes took the styling cues from the Concept Style Coupe that was first introduced at Pebble Beach. Mercedes knew it would be a big hit because of the response. The most frequent comment heard was, “please put this car into series production.” And that’s what Mercedes did and brought it into production.

The sleek styling of the CLA isn’t just about good looks. A new generation of buyers want to know their cars are not polluting the environment. And the new CLA Class is one of the least polluting cars on the planet. It starts on the outside with the CLA Class leading the field in wind resistance. The new four-door coupe has a Cd value of 0.23, making it the most aerodynamic vehicle in the world. When it comes to the drag area the four-door coupe crosses a magical line with a figure of just 0.49.

Next comes the technology in the CLA that will keep a new generation connected. It starts with the Drive Kit Plus for the iPhone, together with the Digital DriveStyle app specially developed by Daimler, makes it possible to seamlessly integrate iPhones 4 and 4S in the CLA. This is what a new generation of buyers is looking for.

Mercedes calls the new technology mbrace, and buyers can choose three different packages and get useful features like traffic and weather alerts, roadside assistance, local fuel prices and movie theater showtimes. The three packages can be purchased for a monthly or yearly fee and they come on the new CLA-Class with trial subscriptions included.

Mercedes is attracting a new generation of buyers with the all-new 2014 CLA-Class with its dynamic four-door coupe styling, fuel-efficient aerodynamics and connectivity for a new generation. It’s a combination that is working as buyers are flocking into Mercedes showrooms. So much so, that Mercedes can’t keep up with the demand.

Patrick Rall wrote on December 30, 2013 - 9:49am Permalink
This new Mercedes looks awesome even before you see the price tag. When you then learn that it starts under $30,000...its hard to wonder why even more people arent snatching them up. MB has successfully engineered a luxury car that can wear the brand name with a price lower than many economy cars. - Mind Blown -