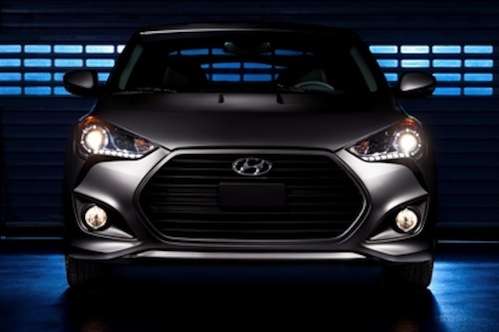 The 2013 Hyundai Veloster Turbo was unveiled earlier this year and there are rumors that a higher-performance variant could be in the plans from the South Korean automaker.
Advertisement

While we don’t like to report on rumors, it appears there is a good possibility that Hyundai is planning on bringing out a higher-performance version of the popular Veloster turbo in the near future. Motor Authority is reporting that a “recent conversation with an anonymous source close to the matter”, said that Hyundai has left room in the Veloster Turbo lineup for there to be a higher-performance model.

The current Veloster Turbo offers a 1.6-liter turbocharged four cylinder that pumps out a respectable 201 horsepower and 195 lb. ft. of torque. But it’s probably not sporty and fast enough to compete with the Volkswagen GTI or the Mazdaspeed3. The executives at Hyundai are smart enough to know that they will need a faster version of the Veloster turbo to compete with the sporty hot hatches out there.

It could be all by design

Motor Authority reports that the current Veloster Turbo setup is probably by design. The more powerful Veloster Turbo uses the same suspension as the base Veloster with a naturally aspirated engine. The only difference is the Turbo gets 18-inch wheels in place of the standard 17 inch wheels. It is suggested that this was done on purpose by Hyundai engineers, allowing room to offer a higher performance variant.

Hyundai could offer suspension upgrades with a lowered stance for better handling and performance with a higher horsepower engine. They could also tweak the existing 1.6-liter turbo by giving it larger intake and exhaust manifolds, add a performance exhaust system and possibly update the ECU for better performance. It wouldn’t take too much for Hyundai engineers to squeeze another 25 horsepower from the exiting powerplant.

The other possibility would be for Hyundai to use the existing 2.0-liter turbo engine from the Genesis Coupe that produces 274 horsepower. Although the added expense of retooling might push the price too high to keep the Veloster competitive. While it’s too early to speculate about what Hyundai would call the new higher-performance Veloster, it would surely be hit with buyers who are looking for a high-performance version of the three-door coupe.

Hyundai Motor Group is one of the more progressive auto makers around, and it would be more of a surprise if we don’t see a new Veloster Turbo performance model in the near future. Stay tuned.