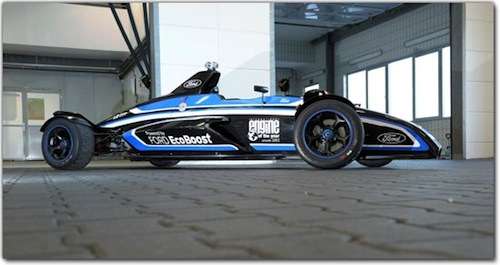 Ford’s 1.0-liter EcoBoost Formula Ford race car has scored one of the fastest lap times ever at Germany’s famed Nurburgring, higher on the list than the 700 horsepower Lamborghini Aventador.
Advertisement

Ford’s award winning 1.0-liter EcoBoost engine continues to impress and has just scored one of the fastest lap times ever at Germany’s famed Nurburgring Nordschleife circuit in a unique road-going Formula Ford race car. The one-off single-seat racer completed the lap in 7 minutes, 22 seconds to register the 11th fastest time ever on the circuit. No other three or four-cylinder car has posted a faster time at the legendary circuit.

This gets even more impressive compared to the list of supercars that it beats. The incredible time puts it ahead of a host of supercars including the 700 horsepower Lamborghini Aventador, 660 hp Ferrari Enzo and 602 hp Pagani Zonda. The 1.0-liter EcoBoost-powered Formula Ford boasts an unofficial top speed of 158.8 mph and a 0-62 mph time of less than four seconds.

The super-fast lap time is even more remarkable because it was accomplished with a road-legal car. The team modified the vehicle so it would be fully street legal by fitting it with wheel covers, front and rear lights and indicators, aerodynamically designed wing mirrors and a horn. The engine is mated to a six-speed manual gearbox and was driven on street-legal tires.

Racing driver and course specialist Nick Tandy, 28, who completed the drive, was very impressed with the engines performance. “This little engine has people rubbing their eyes in disbelief, it’s simply astonishing that a 3-cylinder, one-liter engine can deliver that kind of performance.”

We haven’t heard the last of Ford’s 1.0-liter EcoBoost engine. The tiny three-cylinder engine will continue to have a global impact.

Tesla Contemplates A New Strategy for China Retail even As Sales Boom
Jay Leno on Elon Musk & EVs: “I Think He Should Get ... Credit"
END_OF_DOCUMENT_TOKEN_TO_BE_REPLACED