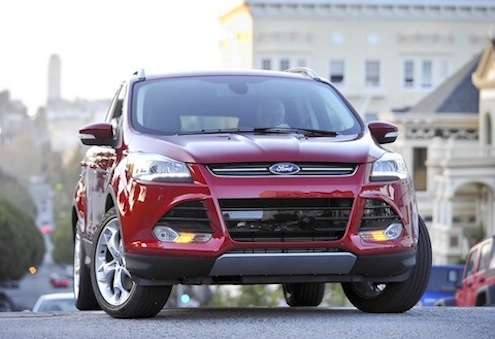 Ford’s EcoBoost engine is having a huge global impact

Ford’s EcoBoost engines that provide fuel-efficiency without sacrificing power, are having a global impact as the powerplant will motivate up to 1.6 million vehicles annually.
Advertisement

When Ford first announced its intentions to build the EcoBoost engine in 2008, it didn’t cause much of a stir. From 2009 -2011, Ford quietly advanced the twin-turbocharge direct-injection engine around the world and began production in the UK, Spain, Germany and Romania before the end of last year.

This year, Ford announced it will offer EcoBoost engines in 11 vehicles in 2012, up from 7 in 2011. The 2014 Taurus will get the new 2.0-liter engine and a 1-liter, three-cylinder is coming next year in the Focus. The Explorer also will offer 5 EcoBoost engines. And that’s just in the U.S.

Ford of Europe announces it will more than triple EcoBoost equipped vehicles by 2015. The number of models offering EcoBoost will increase to 10 by 2015. Ford will deliver 1.6 million turbocharged EcoBoost engines globally by 2013, which exceeds the automaker's target by 100,000 units, said Mark Fields, Ford president of the Americas.

What makes EcoBoost so efficient

Ford first of all uses a twin-turbo direct-injection technology that gets more power from a smaller engine. Ford is able to produce the same amount of power and performance from the smaller displacement EcoBoost than with the larger naturally aspirated engine it is replacing. They are able to accomplish this first by using an exhaust manifold, cast into the cylinder head, which lowers the temperature of exhaust gases to enable the optimum fuel-to-air ratio across a wider rev band.

A unique cast iron block warms the engine more quickly than a conventional aluminum block to cut the amount of “warm-up” energy required by 50 percent, and cut fuel consumption. And two main engine drive belts are immersed in oil to deliver a quieter, more efficient engine. Another energy-saving technology uses an offset engine configuration that unbalances the flywheel and pulley instead of adding energy-draining balancer shafts.

Ford is stepping up and delivering in a big way and the EcoBoost engine is delivering better fuel mileage. Ford is offering eight vehicles that deliver 40 mpg or better by year-end which is double its number versus 2011. Ford says they offer more 40-mpg-or-better vehicles than Toyota and General Motors offer combined.

The fuel-efficient EcoBoost powertrains are now a mainstay in Ford’s lineup and offer up to a 15 percent reduction in CO2 versus larger-displacement, non-turbocharged engines. A 1.0-liter engine, Ford’s smallest EcoBoost, arrives in one of Ford’s U.S. small cars next year. Already on sale in the European Focus, the 1.0-liter engine was named the 2012 International Engine of the Year this month. Additional 1.6-, 2.0- and 3.5-liter EcoBoost engines are already available on Escape, Explorer, Edge, F-150, Flex, Focus ST, Fusion, Police Interceptor sedan and utility vehicles, and Taurus.

According to the recent 2012 Bank of America Merrill Lynch “Car Wars” study, Ford has the freshest new lineup of passenger and commercial vehicles in the U.S. industry, surpassing Honda, Toyota and Hyundai. Ford plans to have the youngest portfolio of passenger cars on the planet in the next five years.

Ford is thinking outside the box and giving customers a fresh new product with the latest technology to go with it. Sounds like a formula for success.