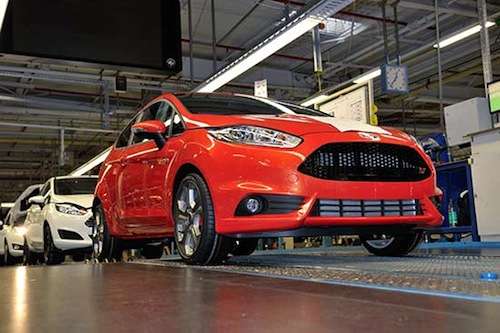 The new global 2014 Ford Fiesta ST has begun production and will be the fastest production Fiesta on the planet.
Advertisement

Ford has just begun production of the fastest Fiesta ever built and the global car is one fast compact ride. The first new 2014 Ford Fiesta ST rolled off the assembly line in Germany and will launch from 0-100 km/h in 6.9 seconds and has a top speed of 220 km/h. The first ever sub-seven second production Fiesta was developed by Ford Team RS, the European arm of Ford Motor Company’s Global Performance Vehicle group.

The second-generation Fiesta ST is launching in Europe first, and has been confirmed by Ford for launch in North America and Asia Pacific. The all-new 2014 Ford Fiesta ST goes on sale in the UK starting in March and orders for the hot hatch have already exceeded 15,000 units before its arrival. The Fiesta has been the UK’s top selling car since 2009.

The 2014 Fiesta ST gets high-performance goodies

Ford uses the global B-car chassis on the new hot hatch and it has been refined over the last 30 years of global production. “The new Fiesta ST is a very modern performance car built on more than 30 years of fast Fiestas and a global development process,” said Juergen Gagstatter, chief programme engineer, Performance Cars, Ford of Europe. “This vehicle is a significant step forward, both in terms of our proud heritage of blending a powerful engine with a dynamic chassis, and also in achieving reduced fuel consumption and emissions.”

The fastest production Fiesta ever

Outside the new Fiesta ST gets treatments that set it apart from other European compacts. It features a unique new honeycomb mesh trapezoidal grille exterior and dramatic rear diffuser element. Inside it comes equipped with Recaro seats as standard for the first time on any Fiesta. It also comes with Ford’s latest technology like MyKey, a Ford-exclusive technology that allows parents to encourage safer driving and limit their teenager’s exposure to risk at the wheel.

That will not be an easy task for parents considering the Fiesta ST’s high-performance capabilities. It also features Ford SYNC, a voice-activated in-car connectivity system with Emergency Assistance. It directly connects vehicle occupants to local emergency services operators after an accident. As the hot new hatch makes its launch in Europe, more than half of Fiesta ST production is destined for the UK. The British know just how much fun performance can be in a compact, and the new global 2014 Ford Fiesta ST is sure to remain the UK’s top selling car.