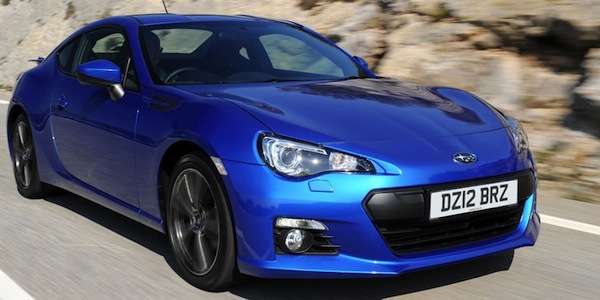 Subaru UK expands its range of BRZ sports cars with the re-introduction of the SE model. Why the new lower price?
Advertisement

Subaru UK has made the 2015 Subaru BRZ two-door coupe even more affordable for buyers in the UK. BRZ has been a popular sports car in the UK and now Subaru re-introduces the base SE model at a new low price of 22,495 (British Pounds) OTR. With the addition of the entry-level SE BRZ, Subaru now offers four models in the lineup for UK customers.

Subaru UK will have four 2015 BRZ models for driving enthusiasts to choose from. The SE manual starts at 22,495, SE auto 23,995, SE Lux manual 23,995, and SE Lux auto 25,495 all over the road pricing. The new 2015 BRZ pricing follows on the heels of the price reductions in the UK with the launch of the new 2015 WRX STI at 4000 less than the old model. Subaru is able to do this because they can pass along the benefits of the more favorable exchange rates.

The 2015 Subaru BRZ keeps the same drivetrain since its introduction in 2012, but it’s a good combination of power and sporty driving dynamics. BRZ SE is still powered by the 200 hp 2.0-liter horizontally-opposed Boxer engine and features one of the lowest centers of gravity of any production car in the world at just 18.1 inches. This is because of Subaru’s Boxer engine design with its inherently low height and its mass concentrated low in the chassis. Subaru’s BRZ takes maximum advantage of this.

The 2015 Subaru BRZ features a rear-drive configuration which is ideal for a sports car. BRZ is also lightweight and weighs in at just 2762 lbs. Subaru uses a high-tensile steel throughout the cars body and chassis in order to keep it light. They also use an aluminum hood to reduce weight. This is one of the main factors that makes the 2015 BRZ agile.

UK Customers can step up to the BRZ SE Lux and upgrade to Alcantara and leather trimmed heated seats. All automatic transmission models feature steering wheel-mounted paddle shifters. BRZ has been a successful launch in the UK and is the result of the collaborative agreement between FHI Ltd and Toyota Motor Corporation. BRZ and its sister Toyota GT-86 are manufactured at Subaru’s Gunma plant in Ota-city, Japan.

Subaru UK is offering the reintroduced 2015 BRZ SE (22,495) now in UK Subaru showrooms. The 2015 Subaru BRZ remains one the most affordable sports cars in the world. Stay tuned to Torque News for the 2015 Subaru BRZ Series.Blue review coming soon.