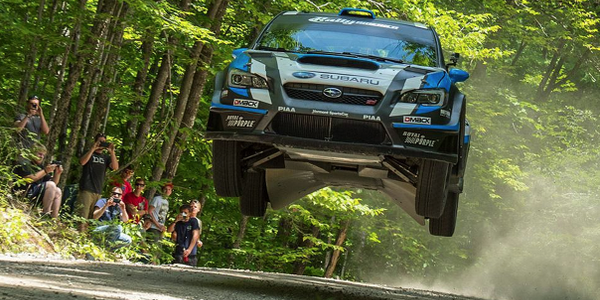 It’s the biggest Rally America race of the year for SRT USA and the 2015 Subaru WRX STI. Who’s going to win the battle?
Advertisement

It’s the first race that the Subaru WRX STI has had any real competition this season and Ken Block is showing Subaru the New England Forest Rally is going to be a battle.

David Higgins and his 2015 Subaru WRX STI is also battling teammate Travis Pastrana along with rival Ken Block for bragging rights at New England Forest Rally. It’s big because there’s a lot at stake in this race for David Higgins and Subaru Rally Team USA. Even though the championship is all but locked up by SRT USA, there’s more on the line.

Higgins is trying to achieve a perfect season and Block could throw a wrench into the 2015 Subaru WRX STI’s chances. Higgins, who is currently on pace for a perfect season, is trying to do something that hasn’t been done since American rally legend John Buffum had an undefeated season in 1987.

Pastrana is driving his 2014 Subaru WRX STI from last year. Pastrana won the New England Forest Rally twice before (2007, 2009) while Higgins claimed his first victory of the rally last season. Ken Block brings his #43 2012 Ford Fiesta HFHV along with co-driver Alex Gelsomino to NEFR and will try to upset Higgins’ perfect season.

On the first day, Friday, Higgins and co-driver Craig Drew came out swinging for the fences, setting a fast pace to establish a five-second lead over teammates Travis Pastrana and Chrissie Beavis on stage one. "We're going to have to work hard for the whole rally,” said Higgins. “In general the strategy is to start safe.”

Block and Gelsomino were sitting in third place after the opening stage with the #43 Ford Fiesta, six seconds off the lead. Pastrana was in second and only 5 seconds behind Higgins until their WRX STI lost power during their transit onto stage 2. They are expected to return to the race today under the rally restart rule, but with time penalties, they are out of podium contention.

On the third and last stage of the day, Block stayed in second place behind Higgins and finished 33 seconds off the first place pace of the 2015 WRX STI. Blocks says, “We’re on a good game plan but the car seems to be slightly underpowered and we can’t figure out why. Race cars are finnicky sometimes. Something seems off. It is what it is and hopefully we can find out tonight and be on the right pace tomorrow.”

Block will have plenty of stages today to try to catch Higgins. Friday’s 3 stages had only 31 competitive stage miles, and today, there will be 77 miles covered in the final 10 stages. It will be an epic battle between David Higgins’ 2015 Subaru WRX STI and Ken Block as they will go all out to win the 25th anniversary running of the New England Forest Rally. Will Ken Block in his #43 Ford Fiesta ST blow up Subaru’s chances of a perfect season? Stay tuned...

Toyota's First EV Will Have a Name of BZ: Toyota BZ
First Videos From Inside The Boring Company's Las Vegas Loop
END_OF_DOCUMENT_TOKEN_TO_BE_REPLACED