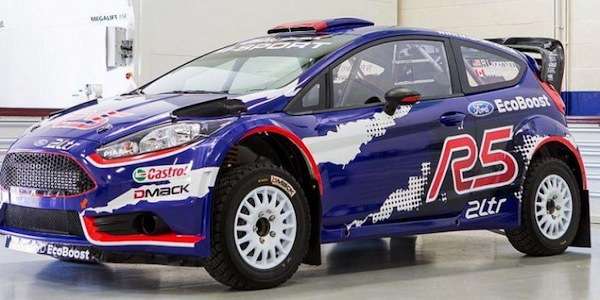 The New England Forest Rally is the sixth round in the 2015 Rally America National Championship. David Higgins and Craig Drew have five straight wins in the 2015 Subaru WRX STI. Head Hoonigan Ken Block’s Ford Fiesta entry along with his partnership with M-Sport and Team O’Neil, will pose the first real threat to challenge SRT USA.

Block is bringing a full squad of Ford rally cars to compete at the NEFR next month, including a brand new M-Sport Ford Fiesta R5. If Subaru was thinking about an undefeated season, the first in the U.S. since John Buffum’s undefeated year in 1987, this could spoil their party.

Ramana Lagemann, a New England local from Boston, will pilot the new M-Sport Ford Fiesta R5 in its worldwide debut at the 25th anniversary running of NEFR. Canadian Nathalie Richard who was co-driver for Subaru Rally team Canada last year, will be his co-pilot.

Ken Block will be driving his Ford Fiesta HFHV along with co-driver Alex Gelsomino when they hit the dirt at NEFR next month. The duo won their first Rally race this year in April at the International Rally of Whangarei in New Zealand. Now they are primed to take on Higgins and Drew in the new unbeaten 2015 Subaru WRX STI.

Next month’s event will be especially exciting as Ken Block and his Hoonigan Racing 2015 Ford Fiesta will be at the NEFR July 17-18. This real competition for SRT USA’s 2015 Subaru WRX STI from Block should make for a very interesting high-speed battle through the rough...read more.

Lagemann, a former factory Subaru driver, will pilot the R5 that boasts a 2.0-liter Ford EcoBoost engine using the latest generation technology and was developed in-house by M-Sport for rally championships, including Rally America, where FIA homologation is not required. Lagemann has lots of rally experience and popped up last month at the Olympus Rally, where he won the 2WD category in a rear-wheel-drive BMW M3, with co-driver Chrissie Beavis.

NEFR will be a family affair for Ken Block as his wife Lucy is also signed up to compete. Lucy Block will run a 1600cc Ford Fiesta R2. The Block family will compete in the 25th anniversary running of NEFR. The rally race takes place July 17-18 and features 120 challenging stage miles over two days of competition, including a return to the smooth and twisty stages first used in 2014, as well as to the classic Sturtevant Pond/Fish Pond Stages. Will Ken Block spoil Higgins and Drew’s perfect season in the 2015 Subaru WRX STI? Stay tuned.

Toyota's First EV Will Have a Name of BZ: Toyota BZ
First Videos From Inside The Boring Company's Las Vegas Loop
END_OF_DOCUMENT_TOKEN_TO_BE_REPLACED