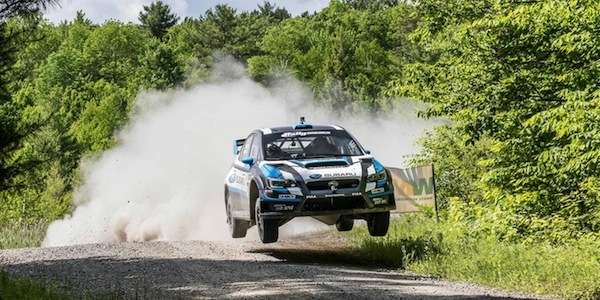 The 2015 Subaru WRX STI Rally car driven by David Higgins wins another victory for Subaru at STPR. How close was the race?
Advertisement

It was the fifth win in a row this season for David Higgins and Craig Drew driving the new 2015 Subaru WRX STI. It was the 39th running of the Susquehannock Trail Performance Rally (STPR) in Wellsboro, Pennsylvania.

Higgins and Drew finished Day 1 of the historic rally in first place with a lead of 51.2 seconds over Adam Yeoman and Jordan Schulze of FY Racing in their 2007 Subaru WRX STI. Friday was tough day as the drivers had to deal with heavy rain as the race got under way. Because of the severe thunderstorms, organizers were forced to cancel the last two stages of the day out of concern for the safety of spectators and event workers.

The weather improved and racers were greeted with blue skies on day 2. The morning stages were still slippery from the day before but Higgins ran a flawless race all day and the team took their 5th consecutive win this season winning the event by over 5 minutes. The drivers faced challenges from the dense forest and shadows at STPR.

SRT USA underwent a paradigm shift between last season and the new 2015 season. There’s a new platform for the 2015 Subaru WRX STI that’s been refined over years of motorsport. Subaru says they are ready to take a big leap forward from...read more.

When asked about the stages, Higgins commented “You can’t really look through the corners with the dense trees around, we get lots of shadows and it is tough to pick your breaking point. However, our Subaru has been absolutely 100 percent perfect. We were able to beat our stage records this weekend, even with the smaller restrictor and less power, which goes to show you how great of a job the team did on the new chassis. I am looking forward to taking it to the next rally.”

Ken Block will be at the next Rally America event

Next month’s event will be especially exciting as Ken Block and his Hoonigan Racing 2015 Ford Fiesta will be at the New England Forest Rally July 17-18. This real competition for SRT USA’s 2015 Subaru WRX STI from Block should make for a very interesting high-speed battle through the rough Maine roads. Stay tuned.

Tesla Contemplates A New Strategy for China Retail even As Sales Boom
Jay Leno on Elon Musk & EVs: “I Think He Should Get ... Credit"
END_OF_DOCUMENT_TOKEN_TO_BE_REPLACED