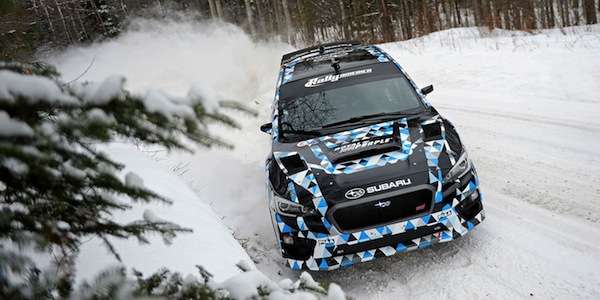 The newest edition of Launch Control covers the new 2015 Subaru WRX STI rally and Global Rallycross cars. How long has 2015 STI been in development?
Advertisement

After two years of development, Subaru Rally Team USA put everything they’ve learned into the new 2015 Subaru WRX STI platform for the 2015 Rally America and Red Bull Global Rallycross seasons. David Higgins and Craig Drew made its debut in competition for the first time at the Sno*Drift Rally in Michigan. They came away with a convincing win.

SRT USA underwent a paradigm shift between last season and the new 2015 season. There’s a new platform for the 2015 Subaru WRX STI that’s been refined over years of motorsport. Subaru says they are ready to take a big leap forward from 2014.

The 2015 STI has been in development for over 2 years

Development of the new 2015 STI started over two years ago at Vermont SportsCar’s shop. Jonathan Carey, #75 Lead Engineer, says, “We actually introduced a lot of the changes for the 2015 model early in the 2014 car. That’s how far ahead of this model we were. The intention was to run through the big unit changes like electronics, suspension and geometry. We got all that dialed in early.”

Over 1000 hours went into the fabrication of the chassis with new geometry to get the car ready for the new season. The first real test for the new 2015 STI Rally car started in January at the Sno* Drift Rally 2015 in Michigan. The cold made the first race even more challenging.

Rally racing is a demanding sport and it's almost unheard of for the debut of a brand new car to be completed without a single problem. The new 2015 WRX STI built by Vermont SportsCar was impressive and ran the full race without any problems or setup changes whatsoever. It's a testament to...read more.

Global Rally Cross gets the same new chassis with its new geometry as the 2015 STI Rally car. 2014 saw great progress and the GRC team felt they broke through against the more experienced teams. Five podiums and the first GRC victory proved Subaru was getting closer. Will they take a leap forward with the 2015 STI?