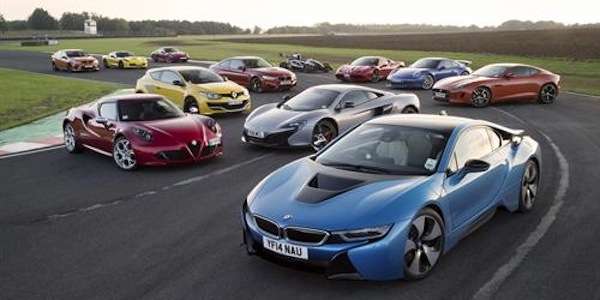 The BMWi8 heads an all-star lineup of performance cars for the Performance Car Show at Birmingham’s NEC. There’s one Subaru sedan that’s a surprise.
Advertisement

Is there any better way to start out the new year than with a performance car show? Performance car enthusiasts in the UK can start 2015 in style at the Performance Car Show at Birmingham’s NEC, where a host of the latest road-going supercars, classic icons and World Championship winners will be displayed January 8-11. What is a 1995 Subaru Impreza doing sitting alongside these other supercars?

The BMW i8 hybrid supercar will headline the show along with 14 other can’t-be-missed performance cars and supercars at the show. The other cars being displayed at the show will be the LaFerrari, Mercedes F1, Ferrari 458 Speciale, McLaren 650S, Lamborghini Huracan, Ferrari F40, Mercedes C11, Ariel Atom 3.5R, Radical SR8 RSX, Jaguar XJR15, Citroen DS3 World RX Supercar, Zenos E10 S and Vauxhall VXR8 GTS. And a 1995 Subaru Impreza?

BMW i8 is the future of supercars

Representing the future of high-performance sports cars will be the new BMW i8. Its 1.5-liter three-cylinder turbocharged gas engine combined with an electric motor produces 357 horsepower and 420 lb. ft of torque that gives the sports car a 0-62 mph sprint time of 4.4 seconds. That’s also due in part to its light carbon fiber reinforced central tub. It’s a revolutionary yet accessible hybrid supercar and delivers the kind of high-performance that would excite any driving enthusiast and show attendee.

A surprise car at the show

A 1995 Subaru Impreza may seem out of place alongside all these supercars, but Colin McRae drove this car and created motorsport history in the era-defining Subaru Impreza 555, becoming Britain’s first World Rally Champion in 1995. The Impreza definitely wouldn’t be considered a supercar like the others at the show, but it spawned the 2015 WRX STI iconic performance car that is still setting records today.

Colin McRae is a legend

Colin McRae drove this iconic Impreza and is one of the most famous drivers to ever get behind the wheel of a Subaru Rally car. The Subaru team won big with the Impreza 555 and Colin McRae had a great career driving for Subaru. Colin is widely recognized as the most distinguishable rally champion. In 1996 he was awarded the Order of the British Empire, and in 1998 received the title of the fastest driver on the planet.

On September 15, 2007, Colin was tragically killed in a helicopter crash along with his five year old son Johnny and two family friends. Colin’s famous 1995 Impreza L555BAT is on display in the Riverside Museum in Glasgow and will be preserved for rally fans to see. Over 82,000 fans are expected to be at the show in January and will see the BMW i8 and 14 other high-performance sports cars. The Subaru Impreza 555 will sit right alongside the fastest supercars in the world, and British performance fans know its importance.

Tesla Contemplates A New Strategy for China Retail even As Sales Boom
Jay Leno on Elon Musk & EVs: “I Think He Should Get ... Credit"
END_OF_DOCUMENT_TOKEN_TO_BE_REPLACED