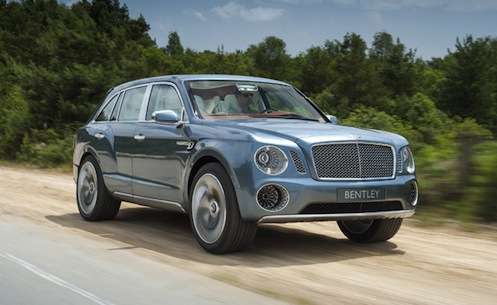 Bentley reveals fastest most luxurious SUV in the world [Video]

Following its debut at the Goodwood Festival of Speed, Bentley has released images and video of its new EXP 9 F luxury performance SUV.
Advertisement

Bentley has given us a full video and images of their new pinnacle luxury performance SUV, the EXP 9 F. The car had not been seen since the concept was unveiled at Geneva. Now fresh off its appearance at the 2012 Goodwood Festival of Speed, Bentley yesterday issued a press release giving us exclusive images and the first video.

Bentley took the EXP 9 F concept to Goodwood in order to judge customer and public reaction to the idea of Bentley actually putting the luxury performance into production. Bentley plans on using “a systematic and comprehensive process of gauging reaction” that started with its unveiling at the International Salon d’Auto earlier this year in Geneva, continued at the Goodwood Festival of Speed and will conclude at the Concours d’Elegance in Pebble Beach, California in August.

The new information revealed by Bentley confirms the luxury Sport Utility Vehicle will take its design cues from other models and infuse them into a luxury vehicle with all-terrain capability. If the EXP 9 F actually makes it to production, it will be the fastest and most luxurious SUV in the world. The ultra-luxurious performance EXP 9 F would be the British company’s third model alongside the Mulsanne and the Continental models.

The video and images reveal the EXP 9 F features Bentley’s famous matrix grille and round lamps up front, as well as an ultra-wide, two-part split tailgate and twin exhaust tailpipes in the rear.

While details of what will power the new luxury SUV have not been announced by Bentley, we know the concept came with a 6.0 liter, twin-turbocharged W12 engine. But we could see the EXP 9 F motivated by a either a 4.0 liter, twin-turbocharged V8 or a hybrid drivetrain under the expensive hood. We can only speculate about how much this ultra-luxury British performer would run, but it could cost north of $180,000.

We will have to wait until Bentley takes the EXP 9 F to the Concours d’Elegance in Pebble Beach, California in August, to get more information. Stay tuned.

Check out the video of the Bentley EXP 9 F below.

This story about the Bentley EXP 9 F luxury performance SUV is updated on May 18, 2018.