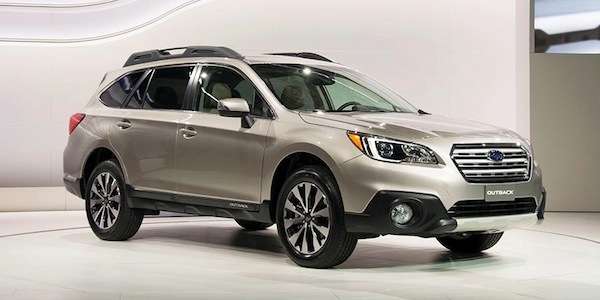 The all-new 2015 Subaru Outback has been introduced at the New York International Auto Show. These five features trump the old model.
Advertisement

The all-new 2015 Subaru Outback wagon gets a number of new refinements that make it better than the old model it replaces. Here are five ways the fifth generation Outback trumps the outgoing model with improvements inside and out. We knew Subaru wouldn’t deviate from their successful formula that made the Outback the number two seller in their lineup. But they made changes to improve upon the core values of good visibility, cargo carrying ability and versatility. What enhancements did the new Outback receive?

The 2015 Outback comes with a roomier interior, a more capable chassis and higher fuel-efficiency than the old model it replaces. It also comes with a new updated design with a enhanced AWD system and its quieter than ever. Here the five upgrades that Outback received for the new fifth generation variant.

The 2015 Outback maintains a similar footprint, and the wheelbase is increased by just 0.2-in., overall length by 0.6-in. and width by 0.7 in. The changes equate to a roomier passenger cabin, at 108.1 cu. ft. (up from 105.4 cu. ft.). Outback makes gains in shoulder, front and rear hip and elbow room and rear legroom. The Outback’s cargo area has been enlarged to 35.5 cu. ft. behind the rear seats, up from 34.3, while maximum capacity with the standard 60/40 split fold-down rear seatbacks folded is now 73.3 cu. ft., up from 71.3. The new-gen wagon’s load floor improves with seats that lay flatter, and new rear seatback release levers in the cargo area enhance convenience.

Outback gets higher fuel-efficiency than the old model it replaces. All Outback come with the new Lineartronic CVT (continuously variable transmission), which is instrumental in the Outback’s significantly improved fuel economy. Manufacturer-estimated ratings of 25 mpg city / 33 mpg highway / 28 mpg combined are up from 24/30/26 in the outgoing model. These figures place the 2015 Outback 2.5i at the top of the midsize crossover class, bettering front-wheel drive versions of some competitive crossovers.

Active Torque Vectoring, an enhancement of the Vehicle Dynamics Control (VDC) stability and traction control system, fosters more neutral cornering by applying brake pressure to the inside front wheel. The Outback 2.5i now uses larger brakes previously available only on the 6-cylinder model, and all models now have ventilated rear discs in place of solid discs used in the old model.

For 2015, Outback features a refined version of the Active Torque Split version of Symmetrical AWD. The system’s electronically managed continuously variable transfer clutch controls torque distribution in response to driving conditions and wheel slippage. As the driver accelerates through turns and curves, Active Torque Split AWD optimizes traction and steering response, particularly when the road surface is snowy or slick.

All 2015 Outback models now come equipped as standard with the X-Mode system, which debuted on the new-gen Forester. When engaged by a switch on the console, X-Mode optimizes engine output and CVT ratio position, increases Active All-Wheel Drive engagement and uses enhanced control logic for the Vehicle Dynamics Control (VDC) system to reduce individual wheel spin.

The cabin of the new Outback is quieter than the outgoing model due to a new acoustic windshield, liquid-filled engine mounts, thicker panels in key locations (floor, toeboard, rear wheel apron, inner fenders) and expanded use of foam insulation and floor damping material.

Outback wagon gets these five new refinements that make it better than the old model it replaces. The fifth-generation 2015 Subaru Outback comes with a roomier interior, a more capable chassis and higher fuel-efficiency than the old model it replaces. It also comes with a new updated design with a enhanced AWD system and its quieter than ever. Look for the new 2015 Outback wagon to be in Subaru showrooms this summer.

Other 2015 Subaru Outback stories of interest.

Carl wrote on April 23, 2014 - 1:27pm Permalink
Let's make it six - available power lift gate at the Premium trim livel. That's been one of the key things that differentiate the Limited Forester from the Limited Outback available today. For those people who aren't as tall or strong as others, the power lift gate can make a difference in which vehicle they choose. And seven - available rear heated seats. And eight - the rear vision camera will now be standard.