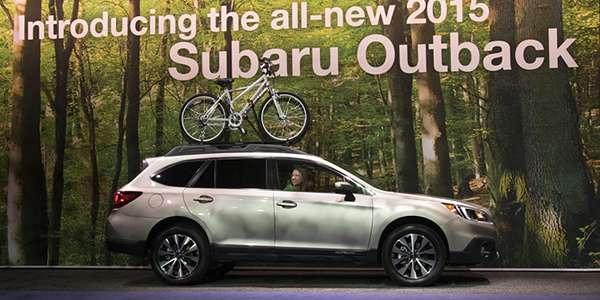 The all-new 2015 Subaru Outback wagon has just made it its global debut at the New York International Auto Show and drops two significant features to achieve better fuel mileage. The new 2015 Outback drops the six-manual and five-speed automatic and gets a new CVT transmission and now gets 33 mpg. That’s a 3 mpg gain over the previous generation 2014 model. That takes the new Outback to the top of the AWD crossover range in fuel economy. Why did Subaru drop the 6-speed manual?

Subaru doesn’t need to offer the manual or the five-speed automatic because they have improved their new Continuously Variable Transmission (CVT) called Lineartronic, so Outback now gets 33 mpg highway with their four cylinder Boxer. Subaru engineers retuned the Lineartronic on the new Outback and even with its Symmetrical all-wheel-drive, the new base wagon gets better mpg than some front-wheel-drive competitors.

For 2015, Outback will still come with two engine choices, the 2.5-liter four-cylinder Boxer engine that produces 175 hp and 174 lb. ft of torque will come standard. The 2.5-liter receives numerous enhancements for lighter weight, improved efficiency, quieter operation and gets a 2 hp bump from the 2014 model. Peak torque remains at 174 lb.-ft. but is spread over a broader engine speed range for more responsive performance. The 2015 Outback will also come with the same 3.6-liter six-cylinder Boxer producing 256 hp and 247 lb. ft of torque on the 3.6R Limited model. Both engines take regular 87 octane unleaded fuel.

Subaru drops the fully synchronized six-speed standard gearbox and the five-speed adaptive electronic automatic in favor of the new CVT on the 2015 Outback. It was all done so the new-generation wagon could get improved mileage over the outgoing model. The 2.5-liter four cylinder sees mileage estimates of 25 mpg city / 33 mpg highway / 28 mpg combined. The 6-cylinder 3.6R Limited model also sees fuel economy improve, with new estimated ratings of 20 mpg city / 27 mpg highway / 22 combined vs 17/25/20 for the outgoing model.

For 2015, all Outback models will only be available with a Lineartronic CVT automatic. Subaru engineers were able to reduce friction in the CVT that contributes to higher fuel efficiency in the 2015 Outback. Both 2.5i and 3.6R Limited will feature the CVT that includes a six-speed manual mode and steering wheel paddle shifters. But the new 3.6R will get a new CVT using a high-torque version that helped the 3.6-liter six-cylinder get a 10 percent increase in fuel mileage. All models are equipped with Incline Start Assist and the electronic Hill Holder System that holds the vehicle in place until the driver applies the throttle.

This writer isn’t fond of the CVT transmission, but I recently drove the new 2014 Subaru XV Crosstrek Hybrid with the Lineartronic and was impressed. We took the Subaru Lineartronic CVT in the XV Hybrid up I-70 into the mountains west of Denver and pushed it hard. The shifts were smooth and there were only minor discern-able steps or shifts between the highest and lowest available ratios. Subaru has made impressive improvements in the CVT for sure with the new Lineartronic. The new Outback now features the same new Lineartronic CVT and Outback buyers will be impressed with it.

The all-new 2015 Subaru Outback wagon loses the six-speed manual gear box and five speed automatic, but gains a new CVT in favor of impressive fuel mileage for an all-wheel-drive crossover. Most buyers won’t miss the manual and the CVT automatic is a significant upgrade over the old five-speed adaptive electronic automatic. Come back tomorrow and we’ll look at three other new fuel-saving features on the 2015 Outback.

Carl wrote on April 18, 2014 - 10:48am Permalink
The CVT transmission was rated at (and typically achieved, depending upon the driver) better gas mileage than the manual transmission anyway. You see that now on the Foresters, which with the CVT are rated at 32 mpg on the highway while the manuals are only rated at 29. What this DOES do is remove the Outback from that list of cars that can be flat-towed behind a motor home - but that niche is nicely filled by the manual transmission Foresters now anyway. I'm more interested in seeing how the car handles with electronic power steering - there is a big difference between the Foresters and Outbacks now.
J Carter wrote on April 19, 2014 - 1:32pm Permalink
Did you just drive I-70 through the mountains, or did you off the highway INTO the the mountains? Cause if you just drove the Crosstrek on the pavement, you didn't really test drive it.
Idiot wrote on April 22, 2014 - 1:00pm Permalink
Maybe you'd like cvt if you actually knew how it worked. It doesn't have steps at all. It's engaged and putting power to the wheels 100% of the time when the car is in drive or reverse. It doesn't have steps. Even in manual mode all its doing is changing the ratio more sharply, while still being engaged constantly.
paul holterhaus wrote on May 18, 2021 - 1:53pm Permalink
I'll hold out for the new Electrics just to avoid CVT's.........CVT's make the Engine rev to undesirable noise levels........Electrics just the opposite.....Hold revs down during acceleration..........Of coarse, They Are silent anyway............Paul
B wrote on April 24, 2014 - 10:11pm Permalink
Manual transmission was one of the few reasons I bought the outback... Big mistake in not understanding your customer base... At least make it an option.
Bob wrote on April 28, 2014 - 2:43pm Permalink
Same here, the only reason I have been shopping Subaru is they still offered manuals.
Justin T. Dix wrote on June 8, 2014 - 5:09pm Permalink
I bought a 2014 outback just because it was the best equipped AWD available with a manual trans. I like manuals as a personal preference not because of fuel economy. I will never buy a Subaru without the manual trans there are much more refined vehicles on the road for the money than an automatic/CVT Subaru.
Adam wrote on June 25, 2014 - 7:21pm Permalink
Totally agree. Like many of my friends, I bought a 2014 outback because it comes in a manual. Looks like it'll be the last Subaru I buy.
Steve Bukosky wrote on September 11, 2014 - 10:42pm Permalink
I bet a big reason manual was dropped is due to the Eyesight option. No way to work the clutch or shift. I think manual will be history as safety items like Eyesight eventually become mandated just as air bags have. I often drive in stop and go traffic. Hell with manual. Endurable with Eyesight---and CVT.
Justin T. Dix wrote on September 11, 2014 - 11:12pm Permalink
As far as I can tell the manual is being offered in the 2015 platform to other countries. Hopefully it will come back in a few years to the US. I have seen this on first year vehicles before.
K Dawg wrote on October 10, 2014 - 8:31pm Permalink
I hope manual transmissions never come back. Manual transmissions are for oldies that can't accept that technology changes. Make way for the new generation dawgs!
Jon wrote on November 6, 2014 - 1:26am Permalink
When you were learning to drive I guess your Daddy neglected to teach you how to drive s stick.
JJ Duru wrote on November 9, 2015 - 4:56pm Permalink
Burn in hell along with your automatic crap.
Colin M wrote on October 14, 2014 - 4:09am Permalink
They will kiss goodbye to a big chunk of their European market share without a manual transmission. I don't give auto-only models a second glance when buying and that is a common attitude over here.