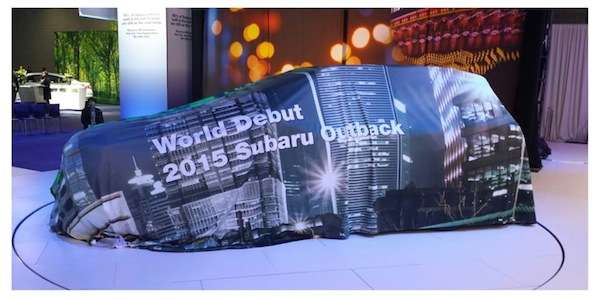 Why 2015 Subaru Outback won’t be messing with successful formula

The 2015 Subaru Outback makes its world premiere today at the New York International Auto Show. What can we expect to see?
Advertisement

The all-new-generation 2015 Subaru Outback wagon makes its global debut today, but don’t look for any surprises. Subaru takes the covers off the 2015 Outback today, and the Japanese automaker controlled by Fuji Heavy Industries (FHI) will be following a simple formula that has made the automaker very successful.

Subaru has created a niche market with their multi-use all-wheel-drive vehicles and they stick to some specific core values with their entire lineup. The Outback is their number two selling car behind the 2014 Forester, and they don’t want to mess with a successful formula that has given them four years of consistent sales records.

What are Subaru’s core values? There are three key areas that keep consumers either coming back to the brand or is attracting new buyers who have never purchased a Subaru before. The success of the brand is not just luck, but is a carefully planned out strategy that buyers are responding to in a big way.

Subaru is all about safety and the new 2015 Outback will continue in this tradition. Subaru is building some of the best designed and safest vehicles on the planet. They are the only automaker to have received the IIHS top safety picks for every vehicle in their lineup. Look for the new 2015 to be a top safety pick again by IIHS when it’s tested.

It’s not earth shattering news, but the 2015 Outback will be powered by a new more fuel-efficient boxer engine. The new Outback engine will feature the latest fuel-saving technology which makes the new-generation wagon more fuel-efficient. Outback will be powered by 2.5-liter and 3.6-liter six-cylinder engines that will come mated to the newly-tuned Lineartronic CVT automatic transmission for improved fuel-mileage. Subaru bumped up the 2.5-liter four 2 hp in the Legacy and 2015 Outback should see the same increase.

At a time when many automakers are designing SUVs and wagons that look like sport coupes, Subaru bucks the trend and gives buyers what they want. Those core values include good visibility, cargo carrying ability and versatility. The secret to Subaru’s success is that they stick to the basics and then they keep improving on them every year. The new Outback will receive styling updates inside and out, but don’t look for swooping lines that will hurt visibility and cargo room.

And how could we forget what put Subaru on the map and where they created a niche market? Another core value is staying with their excellent Symmetrical all-wheel-drive throughout their entire lineup with the exception of the BRZ sports car. Consumers have come to know Subaru as an expert in all-wheel-drive technology.

The 2015 Subaru Outback will come equipped with a newly refined version of the Active Torque Split version of Symmetrical AWD. An electronically managed continuously variable transfer clutch actively controls torque distribution in response to driving conditions and wheel slippage. The system can send additional torque to the rear wheels either pro-actively or in response to slippage at the front wheels.

The all-new 2015 Subaru Outback will be unveiled today at the NYIAS and it won’t be messing with the successful formula that makes it the number two top seller for Subaru. Outback will continue to be an ideal multi-use vehicle for recreational use for those with adventurous spirits. Stay tuned to Torque News for the latest 2015 Outback news.