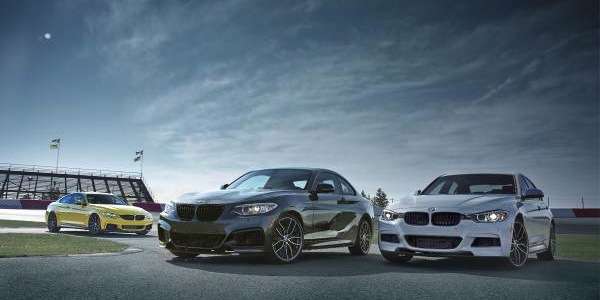 4 upgrades that will make BMW performance enthusiasts happy in Canada

BMW says that due to the overwhelming demand for their performance cars in Canada, the German automaker will offer a limited run of M235i, 335i and 435i M Performance Edition cars. The M Performance appearance and performance parts will be available for the limited run 2 Series, 3 Series and 4 Series cars inspired by BMW’s M division.

BMW 2 Series, 3 Series and 4 Series enthusiasts will have four new upgrades available from M Performance that will make them look better and run faster. The performance components will include an aerodynamics body kit, upgraded wheels, unique choice of colors and a power kit to boost performance. The power upgrade will not be available on the 2 Series.

The M Performance Aerodynamics body kit will come with a rear diffuser, black kidney grilles, a carbon fibre front splitter, side skirts and a sportier exhaust system. The 335i sedan and 435i coupe also get 20-inch alloy wheels, while the M235i coupe gets 19-inch alloys. Canadian performance enthusiasts will be able to choose unique colors from BMW Individual such as Suzuka Grey and Grey Black for the 335i, Dakar Yellow II and Lava Grey for the 435i.

The limited-edition 3 Series and 4 Series BMW’s will also benefit from a BMW M Performance Power kit, which boosts output. BMW Canada did not release power numbers but they say it will reduce the car’s 0-100 km/h time drastically. BMW says power and torque will increase, yet fuel consumption figures remain the same.

The BMW 2 Series coupe will not get any power upgrades, but it will be lighter which should increase performance. The electric seat adjustments, the sunroof and sport auto transmission options will all be eliminated to reduce weight. The M235i M Performance Edition weighs 40 kg (88 lbs) less than a standard M235i and comes with a carbon fiber trimmed steering wheel wrapped in Alcantara.

Exclusive number of vehicles will be available