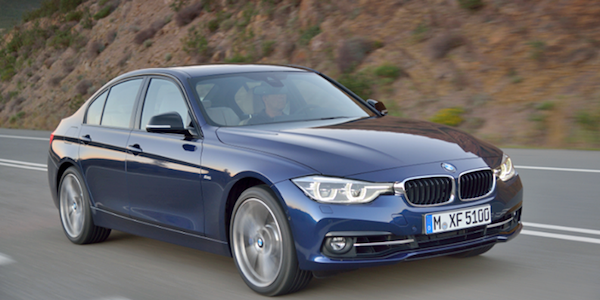 BMW is a luxury performance brand that is designed for European roads which offer lots of curves and bumps. What changes did BMW make to the new 2016 3 Series?
Advertisement

BMW says the new 2016 3 Series is the best driving machine they have produced so far. BMW released a new promo video for the European market and this is where the luxury sedan shines, in the curvy roads of the UK. “Curves help you escape, curves inspire you and they definitely dare you.” BMW says the new 2016 3 Series will help you with every one of them. Can BMW back up this claim?

The new 2016 BMW 340i is coming with new improvements and it will need to be good because the BMW 3 Series is getting new competition from the Jaguar XE and new Alfa Romeo Giulia, two of the latest premium sedans joining an already crowded and competitive segment.

BMW strikes back with the new 2016 340i that gets a new 3.0-liter six-cylinder gasoline powerplant. It’s the first BMW to be powered by the B58 from the new modular BMW EfficientDynamics engine family. The engine is lightweight and is an all-aluminum unit and uses BMW’s TwinPower Turbo technology.

New 340i is quick and gets new suspension upgrades

The 340i Sedan’s 3.0-liter engine is mated with the 8-speed Steptronic transmission and accelerates from 0-60 mph in just 4.8 seconds while the BMW 340i xDrive model takes just 4.6 seconds. All 340i models have an a limited top speed of 155 mph when equipped with performance tires.

BMW also upgraded the chassis and suspension and replaced the three-link suspension setup at each corner with a five-link setup. BMW says the new setup stiffened the chassis without any penalty to ride comfort. BMW also fitted a revised electric power-steering system, which is meant to give better feedback and response.

The new 2016 BMW 340i will be able to better tackle the corners and at the same time give customers a more comfortable ride. It’s what luxury performance fans demand. The upgrades to the new 3 Series will keep it the number one sedan on the fun-to-drive meter. Watch the new 340i from the UK.

christopher wrote on December 4, 2015 - 11:31am Permalink
Awaiting my 340i. Great machine. Jag XE has poor visibility out of back window; poor through front because of thick A pillar. Head room and seating in rear seats are not good - cramped as car inside is smaller than one expect from outside dimensions. People rave about its look but it is average looking and that Jag grille is ugly. The A4 looks dull even the new iteration and is not the driver's car I would want. The Merc 220 is beautifully built but noisy & rough engines. The mini S class style is OK but too reminiscent of a Rover 90 or 95 from early 60s for my taste. Credit for the inside and instruments - the BM needs to do this better in 2017-18 with the new model. The Merc is just not as good a drive as the BM.