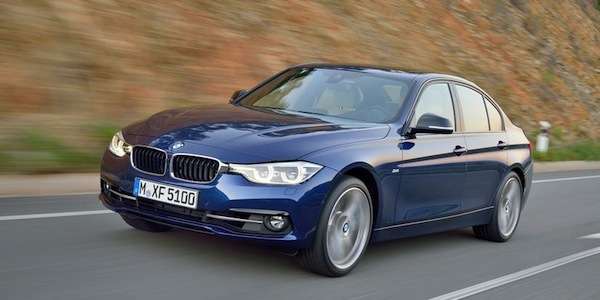 The new 2016 BMW 3 Series lineup gets a refresh and a new 340i features new 320hp TwinPower turbo engine.
Advertisement

The new 2016 BMW 3 Series gets a new 6-cylinder gasoline powerplant that will be featured in the 340i. It’s the first BMW to be powered by the B58 from the new modular BMW EfficientDynamics engine family. The engine is lightweight and is an all-all-aluminum unit and uses BMW’s TwinPower Turbo technology.

This new 3.0-liter engine powering the 340i replaces the N55 powered 335i and tops the 3 Series gasoline line-up. It produces 320 hp, a 20 horsepower improvement over the previous model. Peak torque is an impressive 330 lb-ft,

New BMW 340i Sedan is quick

The 2016 BMW 340i Sedan’s 3.0-liter engine is mated with the 8-speed Steptronic transmission and accelerates from 0-60 mph in just 4.8 seconds while the BMW 340i xDrive model takes just 4.6 seconds. All 340i models have an a limited top speed of 155 mph when equipped with performance tires.

The new BMW 340i will be distinguished from the rear with individual tailpipes on the left and right, while the engines for the 320i and 328d models now come with twin tailpipes. Other features on the 340i models will set it apart like new 18” wheels and optional 19” wheels with performance tires.

Performance enthusiasts can order the new 340i with a 6-speed manual transmission and comes with a dual-mass flywheel with centrifugal pendulum absorbers. BMW says the technology counteracts uneven running on high-torque engines so that the driver can change gears smoothly. The 6-speed gearbox is also offered with a rev matching function, for automatic throttle blips on downshifting.

In the front and rear of the new 2016 BMW 340i, newly designed headlights with full-LED headlights come standard. The rear view gets an even more dynamic look thanks to its LED tail lights. BMW has not released pricing or launch dates for the U.S. 340i. Stay tuned.

Toyota's First EV Will Have a Name of BZ: Toyota BZ
First Videos From Inside The Boring Company's Las Vegas Loop
END_OF_DOCUMENT_TOKEN_TO_BE_REPLACED