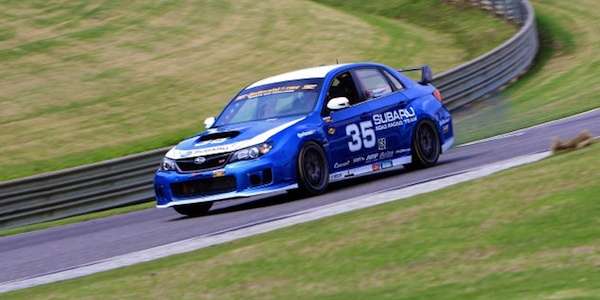 2015 Subaru WRX STI has a rich and storied racing pedigree

The 2015 Subaru WRX STI has a rich and storied racing history on which it draws its performance attitude. See the timeline from 1990 to 2014.
Advertisement

The 2015 Subaru WRX STI is about to launch, and the performance sports car has a one of the richest racing pedigrees from where it gets it quickness and toughness. Since the WRX STI made its debut in the World Rally Championship, the performance car has taken on the most grueling challenges in motorsport and thrown down some of the most extreme acts of performance. This racing pedigree is what makes the new STI what it is today. Each race has given the cars developers the information to make it better. Below, is a timeline from the WRX STI’s motorsport heritage.

1990
The STI-tuned Impreza rally car would not debut until 1993, but its story begins with the first Subaru entry in the World Rally Championship (WRC) in a Subaru Legacy sedan. The mud-flinging Safari Rally in Kenya proved a fitting test for Subaru durability and AWD traction. The Subaru racing story had begun.
1992
Next up for the Legacy was Rally 1000 Lakes in Finland. The race took place over 4 days. Legacy saw 3 rollovers and 1 snapped tree. Racing with goggles and no windshield on the final day, Colin McRae and his Subaru Legacy would still finish in a fight for points. The legend of McRae’s never-lift driving and never-quit Subaru durability is born.
1993
Win number 1 of 47 in the WRC comes as Colin McRae power-slides the Subaru Legacy through the flowing gravel stages of Rally New Zealand. It was the final race for the Legacy in the World Rally Championship.

The STI-tuned Impreza rally car arrives and is unleashed on the WRC in Finland at the Rally 1000 Lakes. Smaller, lighter and more nimble, it took second place in its first event. 46 victories would follow.
1995
Subaru takes its first World Championship, times two. With a win-or-crash drive from behind, Colin McRae leads a Subaru sweep in Britain to win the Drivers’ World Championship. Finishing 1-2 with Carlos Sainz for the season, Subaru also wins the Manufacturers’ World Championship.
1996
Subaru powers to 3 wins, including 2 in a row to close the season and take a second consecutive Manufacturers’ World Championship.
1997
The trademark STI rear spoiler is first bolted to the STI-tuned Impreza rally car. It dominates, winning 8 times that year. With another full-throttle charge, Colin McRae wins the final 3 in a row and Subaru takes its third straight Manufacturers’ Championship.
2001
The “Bug-eye” Impreza races onto the WRC scene. Petter Solberg joins the Subaru team. And Richard Burns wins the second Drivers’ World Championship for Subaru in a 4-way melee at the final event in Great Britain.
2003
Petter Solberg makes his mark with 4 wins, including victory in the season finale at Rally Great Britain, Solberg comes from behind to claim the third Drivers’ World Championship for Subaru.
2006
Colin McRae caps his Subaru legend the same way he started it. In the first X Games rally competition, McRae rolls his WRX STI on the penultimate corner in an all-or-nothing charge for the win, losing by just 0.13 seconds. The winner: teammate Travis Pastrana. A new era for Subaru begins.
2009
Flying 269 feet from the dock to a floating barge, Travis Pastrana jumps his WRX STI to a record over Long Beach’s Rainbow Harbor. A bold way to celebrate 4 consecutive Rally America championships. Pastrana builds a new Subaru tradition of extreme performance feats.
2010
Rally legend Tommi Makinen returns from rally retirement to lay down an unofficial production sedan record lap of 7:55 on the Nurburgring’s Nordschleife, the world’s most famed and demanding road course.
2011
Subaru Rally Team USA driver David Higgins powers through fog and mist, and drops the record in the Mt. Washington Climb to the Clouds. Higgins lowers the all-time best time Travis Pastrana had set in a WRX STI just one year earlier.

Setting a new record for the historic Isle of Man TT Course, Mark Higgins averages over 115 mph through the narrow lanes and walled village streets. And survives a fishtailing 150-mph slide to make it even more memorable.

The Subaru PUMA RallyCross team will start the season with new 2014 Subaru WRX STI Rallycross cars prepared by technical partner Vermont SportsCar. The Subaru GRC team will also start with the 2014 WRX STI that features a 600 horsepower, turbocharged Boxer engine. And of course it will transfer all that power to all four wheels via Subaru’s Symmetrical all-wheel-drive.