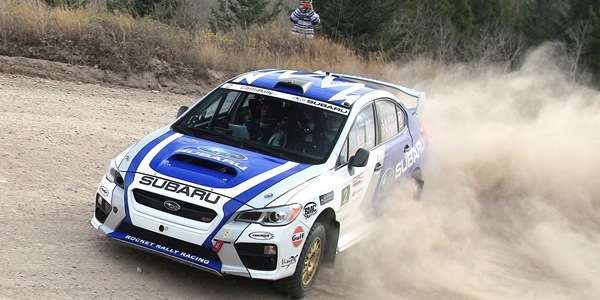 2015 Subaru WRX STI gets even faster at Rocky Mountain Rally

In only its 3rd Rally, the 2015 Subaru WRX STI gets another second-place podium finish. How close were they to the leader?
Advertisement

The 2015 Subaru WRX STI Canada rally car keeps getting faster. In only its 3rd event, the STI scores another second place finish at Rocky Mountain Rally. Subaru Rally Team Canada (SRTC) has been getting faster every race and SRTC driver Martin Rowe and co-driver Nathalie Richard almost pulled off a win in the new STI rally car. How close were they to the leader?

This was SRTC's third consecutive second-place finish, and only the third rally event where the team has competed with the all-new 2015 Subaru WRX STI rally car. Rocky Mountain Rally in Invermere, B.C. proved to be the new WRX STI's strongest outing to date, with SRTC achieving a mere one-minute gap to the rally leader. If it weren’t for two chicane penalties that added 30 seconds to their final score, they would have finished just 30 seconds behind the leader.

Rocket Rally Racing who manages the team for Subaru, continues to further enhance the vehicle and tweak it to the liking of Martin Rowe. Rocket Rally Racing is providing them the best opportunity to gain time and have the best possible results at each successive race venue.

3 stage wins for Rowe and Richard

Rowe and Richard drove the 2015 Subaru WRX STI to three stage wins throughout the event and had no mechanical issues throughout the entire rally. At the end of the stages on Friday, the team was just over 40 seconds off the leaders pace. On Saturday they won three of the last five stages, finishing the event just thirty seconds short.

With each new rally event, the 2015 WRX STI is proving to be reliable and continues to get quicker. Rowe and Richard continue to grow more comfortable with the car and each other as the vehicle increases speed. The team is confident that a first place finish is not far away.

Rowe and Richard are excited for what’s next

SRTC co-driver Nathalie Richard said after the race, "We've proven this weekend that the car is getting faster. We're winning stages. We won half of the stages on day two and we are setting really good times. Martin is really comfortable in the car, we're super comfortable together and we're that much closer to winning a rally.”

SRTC driver Martin Rowe is also pleased with the car and the progress they are making with each new race. He said, "It is only the third rally for the 2015 Subaru WRX STI and we're in a fantastic place, the car is reliable, fast and showing it's pace and potential. We have some stiff competition, but it's not long until we win a rally outright."