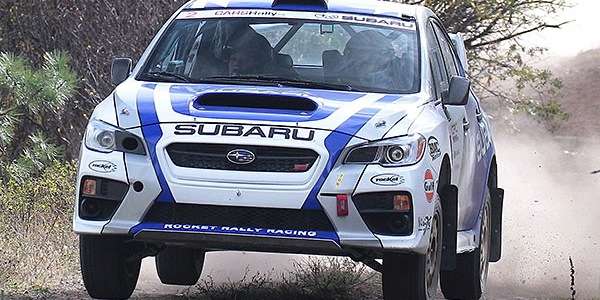 Subaru Rally Team Canada gets another podium with their all-new 2015 Subaru WRX STI. How did they get more speed out of the STI?
Advertisement

It was a strong second outing for Subaru Rally Team Canada (SRTC) with their all-new 2015 Subaru WRX STI. The team stood on the podium at Pacific Forest Rally with another second-place finish. Driver Martin Rowe and co-pilot Nathalie Richard continue to become a more dynamic team and found more speed with the already proven reliable SRTC WRX STI. This was the second race for the 2015 WRX STI and it didn’t disappoint.

This was SRTC’s second-only rally event of the season where they have competed with the all-new 2015 Subaru WRX STI. Rowe and Richard continued to push the STI rally car with new enhancements and pushed each other. The Pacific Forest Rally took place on October 3-4 in Merritt, B.C. The team finished in second place, but felt they could have won the race.

SRTC technicians added further enhancements on the new 2015 Subaru WRX STI rally car before the start of Pacific Forest Rally. They added a new Pfitzner Performance sequential gearbox. SRTC said the new gearbox “performed exceptionally well and was extremely reliable for the entire event, as were all the other components.”

Slowed by wild cattle on the rally course

Anything can happen in rally racing and this event saw some interesting developments take place. SRTC was leading the pack on the first stage of the rally race when they encountered a herd of wild cattle and were forced to slow down. They lost valuable time but were able to get back up to speed. Then with a number of stages remaining, the team encountered a gear selection issue, which cost them over two minutes in time. Rowe and Richard continued to push the STI rally car hard and stayed in second place.

At the next service interval the issue was resolved and the team continued to find more speed in the 2015 WRX STI throughout the entire event. Martin Rowe continues to be impressed with the capabilities of the new 2015 WRX STI. After the race he said, "The more miles we're doing, the more I'm enjoying driving the car," said Rowe. "Although it's the car's second rally, we were able to see more of the WRX STI's true potential and speed, especially with the brand new gear box, which is really, really impressive. It is amazing - the shifts are lightning fast and the gear ratios are awesome, so the investment and time that the Rocket Rally Racing team have put in will continue to pay off as we progress through the series."

SRTC was pleased with another podium finish in only their second race with the 2015 WRX STI. There are two races left in the Canadian Rally Championship, and the team will continue to push for a strong manufacturer finish even though the title is wrapped up. Next up for SRTC and the new-generation 2015 Subaru WRX STI is Rocky Mountain Rally on October 31st in Columbia Valley, B.C.