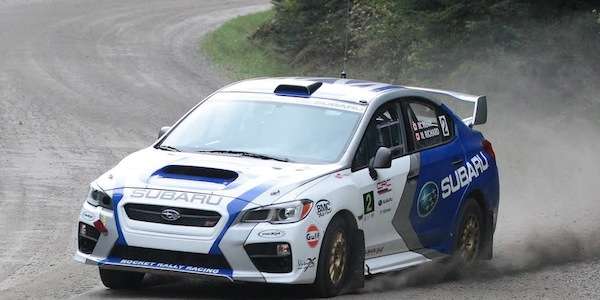 The first-ever 2015 Subaru WRX STI rally car makes its debut at Rallye Defi. Where did the STI finish?
Advertisement

The first-ever 2015 Subaru WRX STI gets a podium finish in its first rally race at Rallye Defi. This was the debut of the 2015 STI Rally car and Subaru Rally Team Canada scored a second place finish in its first-ever rally race. The new 2015 WRX STI was piloted by Martin Rowe and co-driver Nathalie Richard. STI fans have been waiting for the new-generation STI to hit the rally course, and it scores well in its first time out.

Subaru Canada resumed its battle for the Canadian Rally Championship with the 2015 WRX STI at rally circuit Rallye Defi on September 6 in Ste-Agathe, Quebec. The team entered the new STI rally car and unleashed a new driver/co-driver team to challenge the competition. SRTC driver Martin Rowe and co-driver Nathalie Richard “clawed their way” to a second-place finish in Rowe’s first time competing at Rallye Defi.

This was the 2015 STI’s first time out and Rowe and Richard overcame a few fine-tuning issues to secure the hard-fought podium spot. The team was able to work out the tuning on the 2015 WRX STI and won two of the final three stages. This enabled the team to climb into second place on the final stage of the rally and celebrate on the podium.

2015 STI gets all-new platform and enhancements

The new 2015 WRX STI rally car was created in conjunction with Rocket Rally Racing under the leadership of rally legend Pat Richard. The team’s 2015 Subaru WRX STI is the first of its kind with an all-new platform and enhancements. The new SRTC 2015 WRX STI used state-of-the-art computer-aided design (CAD) programs that effectively and efficiently produce calculated improvements. They made extensive use of carbon Kevlar materials on large body portions, such as the doors. This helped the rally car to shed an extreme amount of weight and helped with weight distribution for the optimal rally set up.

The team was pleased with a second place finish on the cars first time out on the rally course. “We’re bringing this car home in second place for its first rally ever and we’re really happy about it,” said Richard. “I’m really happy for everyone at Rocket Rally. They did an awesome job.”

This was the first rally race for the 2015 WRX STI rally-prepped performance car and there is much more to come. “We’ve learned about the car; it’s obviously the first rally,” said Rowe. “It’s been a really good weekend and it’s great to be part of Subaru Canada. There’s lots more to come with the car and the whole crew.”

There’s more potential to get out of the new rally-prepared 2015 Subaru WRX STI. The team will take what they learned and use it to their advantage the next time out. Rallye Defi marked the halfway point in the fight for the Canadian Rally Championship. The battle continues with the Pacific Forest Rally on October 3-4, in Merritt, B.C. Stay tuned.