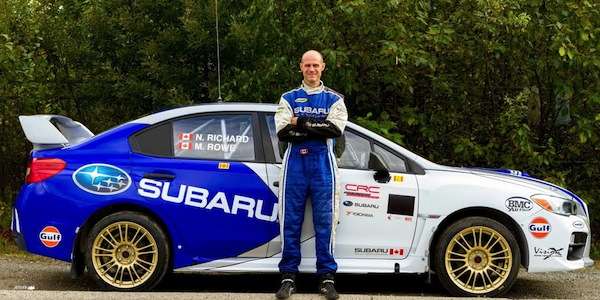 The first rally-prepared 2015 Subaru WRX STI will make its debut in Canada this weekend and not the U.S. What are the complete specs?
Advertisement

The first new-generation 2015 Subaru WRX STI rally-prepped performance car won’t be running in the Red Bull Global Rallycross series, or the Rally America Championship. The first 2015 WRX STI is ready for race action in the 2014 Canadian Rally Championship (CRC). It’s a bit of a surprise we haven’t seen the 2015 STI in the other two series first, as Vermont SportsCar has had the new 2015 WRX STI since the beginning of the season. But the first rally-prepped 2015 STI is ready to go in Canada now. What are the full specs?

The new 2015 WRX STI rally car is being built by Rocket Rally Racing under the leadership of Pat Richard. They have spent countless hours developing the new 2015 WRX STI and getting it ready for rally action. They have released a few specs and we know a few more things about the car and powertrain.

Built from a production 2015 STI

The 2015 STI will use the Subaru manual six-speed transmission with sequential gear kit and Subaru DCCD. It also uses the stock 2015 STI rear differential with STI motorsport limited slip differential. The driveshaft gets upgraded with a shop carbon fiber prop shaft, STI heavy duty drive shafts and uprated clutch and flywheel. The fuel, cooling, brakes and electrical systems have all been upgraded with special "high efficiency" units for the tough rally extremes the car will be subjected to. For maximum traction, the new STI will be fitted with 15" gravel rally wheels and tires.

The first-ever rally-prepared 2015 Subaru WRX STI is ready to go and will be involved in the remainder of this year's events. Subaru Rally Team Canada and the new-generation STI rally car are ready to go for the Rally Defi in the 2014 Canadian Rally Championship (CRC) in Ste-Agathe, QC on September 5-6. Stay tuned for the race results.

Eddie wrote on September 7, 2014 - 10:52am Permalink
This article states the engine used in the rally car is the 2.0 ej207 that was recently unveiled in japan for the 2015. But if I go to the article referenced it sates that engine is DIT, high compression etc. Doesn't sound like a ej207 to me... Sounds like an FAxxx or FBxxx. Am I missing something??
David wrote on September 7, 2014 - 7:48pm Permalink
Just to be clear, the EJ207 isn't what that link is announcing. The link is talking about a new STI-tuned FA20 for the STI.
Sigs Sigs wrote on March 20, 2015 - 8:45am Permalink
No comments I like Subaru