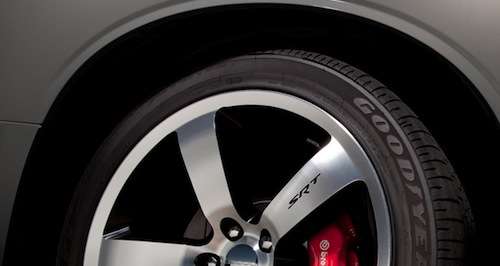 2015 SRT Barracuda could be a Mustang killer

The 2015 SRT Barracuda could be replacing the Dodge Challenger and it may also give the 2015 Ford Mustang major competition.
Advertisement

The SRT Barracuda is reported to be on its way as a 2015 model, but there is new information from Car and Driver, that the new musclecar could be replacing the Dodge Challenger. It was thought that the two cars from Chrysler could co-exist in the lineup, but that may not be the case. The decision to drop the Challenger won’t be based on just sales alone, but will more likely the result of meeting the ever-tightening CAFE standards. The car is just too big and may get axed from the lineup.

The 2015 SRT Barracuda will be much smaller than the current Dodge Challenger. And it’s likely that Chrysler is looking at the new global 2015 Ford Mustang, and looking for a model in their lineup that will be able to compete with the new ponycar. With fuel-economy an issue, and the fact that both the Ford Mustang and Chevrolet Camaro will be getting four-cylinder versions, Chrysler now owned by Fiat, needs to take a serious look at the global market.

C & D is reporting that Fiat has been looking for a rear-drive platform for use by their Lancia, Alfa Romeo, and possibly Maserati holdings. They have been eyeing Chrysler to help them develop a new platform and it looks like the 2015 Barracuda will be “its first fruit.”

Look for the 2015 SRT Barracuda to be six-inches shorter in wheelbase and close to eight inches shorter in overall length. Rear track and overall width are reported to be also shrinking by two inches. And the new Cuda will weight up to 300 pounds less than the heavier Challenger. The suspension will look a lot more like the new global Mustang with the front suspension getting a strut setup; the rear suspension will be multilink, with new geometry.

The new 2015 SRT Cuda’s will also offer a number of engine choices to possibly compete with the new 2015 Mustang. The base model could get a 2.4-liter four-cylinder from the Dodge Dart, possibly with forced induction. There could also be an award-winning Pentastar V6 offering with direct-injection used in the new Barracuda. And the SRT Cuda would have to be motivated by a Hemi V8, but it’s unsure if both the 5.7-liter Hemi V-8 and the 6.4-liter Hemi V-8 will be offered.

It will be interesting to see if Fiat has plans to take the new 2015 SRT Barracuda overseas to compete globally with the 2015 Ford Mustang. Even if they don’t, it will surely be a big hit here in the U.S.

Anonymous wrote on September 25, 2012 - 5:48am Permalink
"Possibly" sounds like it is going to be just another "me too" instead of real innovation. At 300 less pounds it would still be considerably heavier than the current Mustang. The new 2015 Mustang is expected to be relieved of more than 300lbs than it's present counterpart. Ford seems to be innovating and all "Fiodge" and "GM-Government Motors" can do is just try to keep up. The best answer that they seem to come up with is dropping in overbloated powerplants that can kill gas better than it can do anything else, but hey it's a Hemi and that is all some people care about. Forget Mustang Killer, call it what is, Gasoline Killer.
Anonymous wrote on January 23, 2013 - 4:28pm Permalink
The barracuda will always be known as a mustang killer because of it's past. A 318, 340, and 360 will kick the shit out of any 302 or 351 you put up against it thanks.
Anonymous wrote on February 27, 2013 - 1:43pm Permalink
You can call it an "overbloated" powerplant all you want. Naturally Aspirated, GMs have usually made more horsepower that Rustangs. When GM dropped the Camaro and Firebird, Ford continued to try to compete their Mustang against the Corvette, and were embarrassed time after time. Mustangs are good cars for the masses, but are definitely not a "jack of all trade". Besides, those "overbloated engines also sound better. Ford has JUST RECENTLY managed to catch up in performance with my 2006 GTO. I will happily take my 6.0 over your 5.0. Some of us buy our cars without regard to gas mileage. You cannot have a high performance car AND 38 MPG.
M wrote on March 7, 2014 - 6:27pm Permalink
Who would think the Mustang was directed at competing with the corvette?
Cuda Chat wrote on November 2, 2012 - 9:15am Permalink
Should be interesting to see how the muscle car battle evolves. Initially I think the big three were focused more on eliciting that vintage muscle car spirit, and as it gets more and more competitive, they're starting to look and act more and more like sports cars.
Jason wrote on March 2, 2014 - 3:22pm Permalink
Yeah, where is Pontiac and your GTO nameplate now? Just catching up? Please, and the Mustang was never compared to Corvettes, except by Camaroless GM fans. Pfft. Everyone compares their cars to the Mustang, I wonder why. Keep following the followers my freind. Anyone can look at a benchmark and shoot for it, then 2 years later come out with a almost un roadworthy race car to beat a BOSS 302. You needed 2 years, weight loss, 7liters and huge wide tires with magnetic do mahicky dampers to do it. That's cute!
Ken Rogers wrote on March 2, 2014 - 8:08pm Permalink
Pontiac is sadly gone, but my GTO is still here. Umm, yes they were. Frod themselves often tried to compare the Mustang to the Corvette after the F-bodies were dropped. I am quite certain that heads of Ford would NOT be "Camaroless GM fans". Pfft. You are the one following the followers, because your Mustang is known as the 'Me-too Mustang". They are a mass produced car that everyone owns. That is what I would call being a follower. That's cute. No one compared their cars to Mustangs until Ford came out with the Coyote and actually started building the car with quality. Other than special editions such as the 2003-4 SVT, Mustangs were unremarkable. The 4.6 modular was a big swing and a miss. It took Ford coming out with the new 5.0 to compete, and then actually set a benchmark with, once again, the Coyote. Get a clue.
Dave wrote on March 10, 2014 - 4:18am Permalink
Gto more like cto- cavalier touring oblonganza.. Drop a big v8 in a cavalier body and you think thats hot! Just another "scrapple car" - gm was throwing together, all the parts that no one wants and hoping that scrapple is mistaken for real sausage! We got a one of them gto's on our lot and it sat besides mustangs camaros and challengers and chargers. Those cars sold months ago, the gto is the only muscle car left that hasn't sold. Truth is enthusiast realize its just a cavalier with a v8! When you start this car up its ergonomics scream - I'm a heap. Gm junk at its finest, they've built better cars! Mustangs are the original pony cars all the others that came after were answers to the mustang's success, and 50 years later they're going strong. One of these days you will open your eyes and see that legends last because they are forged through years of engineering excellence!
Don Campbell wrote on December 6, 2015 - 1:25pm Permalink
The Australians are getting 1400 HP from their Coyote variant, called the Daytona; yet it was Ferrari that made this motor a reality with this specific crankshaft set up ...my message is...Motorsport cooperation will solve many problems...the Barracuda with the Hellcat; a Dana 60, and fender flares, " All the way to ChulaVista;" will be an 8 second car right off the show room floor.The engineers say they do not make a tire that these V-12 Mercedes turbo's can Hook up same with BMW M cars....ZR-1's Hellcats Camaros Mustangs these Suspensions are not designed to hook up. i am no expert but i know what i like...Pro stock cars Hook up... Squat- Drop- and Adios.....the Catalina 2+2 had fabulous 0-60 times and it was a land yacht too big too heavy but it put the power...Class?...Longitudinal weight transfer Mr. Peebles....kidz...Horse Power has to got like you....Drive with a smile