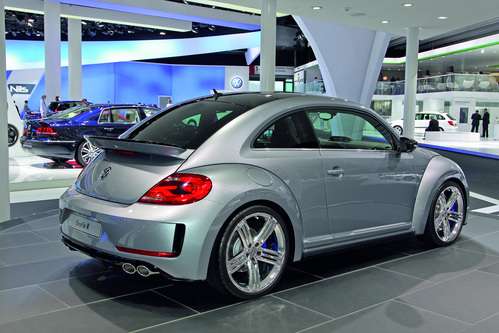 What could make the hot-selling Volkswagen Beetle any better than it already is? Cut the top off and put an oil-burner in it.
Advertisement

Everyone in the automotive world was expecting Volkswagen to unveil a new 2014 Beetle convertible at the New York International Auto Show this week, but as reported by Car and Driver, the German automaker will hold off its debut until November. The all-new Beetle convertible will bow at the Los Angeles Auto Show instead.

News of the new Beetle convertible is not a surprise to anyone, and the car should go on sale early in 2013. VW has said that the same powertrain options that are available in the coupe will also be offered in the convertible. Two engines will be available for the soft-top, a 2.5-liter five-cylinder engine producing 170-horsepower for the base car, as well as a forced-induction Turbocharged 2.0-liter four-cylinder model pumping out 200 horsepower and 207 lb-ft of torque. Both transmission choices can be mated to the engines as well: a six-speed DSG or a six-speed manual.

But the addition of a new engine choice for the North American market could come as a surprise. The new convertible will be offered with a 2.0-liter turbocharged four-cylinder TDI diesel engine that will have 140-horsepower, and 236-lb-ft of torque. It will be available with either a six-speed manual or the six-speed dual-clutch automatic.

Why would Volkswagen offer a turbo-diesel in the new Beetle? Because buyers in the U.S. are finally realizing what a good choice the oil-burner can be. And also because VW is selling its TDI diesels at a record pace. In fact, they account for 23 percent of all VW sales in the U.S. Volkswagen now offers the TDI in their Golf, Jetta models. Toureg, and Passat. The Beetle TDI coupe goes on sale this summer.

Diesel engines have been used in Europe for decades and this is what they drive; small, maneuverable, fuel efficient diesel cars. And as diesel technology continues to evolve, we’ll continue to see diesel engines being used more. Ford has plans to expand their ECOnetic diesel Technology throughout Europe, estimating that half of European Fords sold by the end of this year will have the the new diesel technology, and two-thirds next year.

When it goes on sale next spring, the VW Beetle will be the only diesel convertible available in the United States. The new TDI Beetle should be a hot commodity if it mirrors the rest of the VW TDI lineup.

Photos have not been released by Volkswagen as of yet, but stay tuned to Torque News for the latest developments.