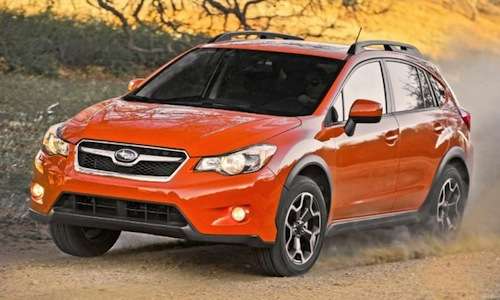 Subaru announced that its all-new compact crossover, the 2013 XV Crosstrek has received another award for its efficiency, and sporty character.
Advertisement

Subaru has announced that its all-new compact crossover, the 2013 XV Crosstrek has been named ‘SUV of the Year’ by UK’s 4x4 Magazine. The new XV Crosstrek has been on the scene just two month’s now and its getting more accolades. Just last month Subaru announced the new crossover had won the "Good Design Award 2012" from the Japan Industrial Design Promotion (JDP). Now in the UK, 4x4 Magazine is praising the new crossover for its fuel economy, enjoyable driving characteristics and ground clearance.

The new XV went up against some stiff competition to win the award in the UK. The Industry-leading 4x4 Magazine put the XV Crosstrek through its paces, both on- and off-road before being crowned the class winner in one of the hardest-fought categories in a special ‘4x4 of the Year’ issue. The small crossover SUV market has expanded rapidly in the last few years and the XV beat out popular rivals from Audi, Kia, Mazda, Nissan and Volkswagen. 4x4 Magazine placed Subaru’s latest All-Wheel Drive model ahead of all of them.

The XV impressed the judges

The judges who are all members of the magazine’s editorial team, voted for the Subaru XV because of its “enjoyable and involving drive”, fuel economy and off-road ability. In the UK, Subaru offers Everything Taken Care of (ETCo), which is a customer service package, that the editorial team said also helped tip the balance in the XV’s favor.

The 2013 Subaru XV is an interesting new arrival in the all-wheel-drive class, and definitely impressed the judges. Nigel Fryatt, Editor of 4x4 Magazine, said, “The SUV class in 4x4 Magazine’s 4x4 of the Year test is one of the most competitive.  For a vehicle which obviously spends most of its time on-road, it is such an enjoyable drive, involving the driver in a positive manner.”

“It also boasts promising fuel economy potential.  When we took it off-road, given the obvious limitations of ground clearance, the Subaru completed our test route with ease.  But what clinched it for the XV was Subaru’s Everything Taken Care of customer service package, which has to be one of the best around.”

The XV Crosstrek gets rugged features

The new five-door Subaru XV Crosstrek is based on the Impreza hatchback, but comes with a more rugged off-road chassis with 8.7 inches of ground clearance, larger tires with 17-inch alloy wheels, larger front brakes, a larger fuel tank and special black wheel arch and rocker panel cladding. The XV has the ability to be a daily commuter during the week, and an off-road trail runner on the weekends.

The editors of 4x4 Magazine experienced the XV’s “fun to drive” characteristics both on and off-road during their testing. Subaru notes, "The new XV Crosstrek boasts a new type of crossover design with larger, unique tires and wheels highlighting a good balance with the body's sharp, stable looks, which gives this new model distinctive product appeal. It's an excellent design that showcases Subaru brand's characteristics."

Subaru is designing new products that are certainly appealing to buyers and they are responding in a big way. Just like the all-new 2014 Subaru Forester that will make its U.S. debut in LA, the 2013 Subaru XV Crosstrek is catching on fast around the globe.