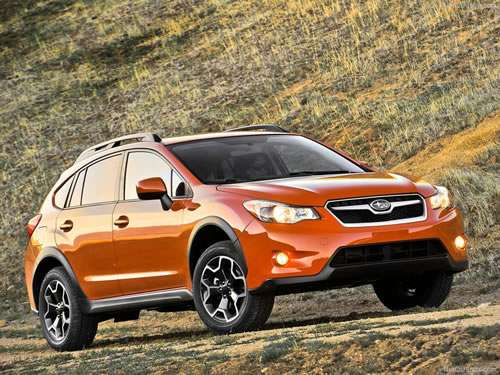 The all-new 2013 Subaru XV Crosstrek and the hot-selling 2013 Impreza have each won an award for having the best design.
Advertisement

Subaru has announced that the all-new 2013 Subaru XV Crosstrek and Subaru Impreza 4-door Sedan and Sport 5-door series have each won the "Good Design Award 2012" from the Japan Industrial Design Promotion (JDP). The 2013 XV Crosstrek has just begun to arrive in showrooms and the new crossover is already receiving awards. The newly-designed Subaru Impreza has been a huge sales success around the globe and just continues to impress.

The new Subaru XV Crosstrek is a five-door crossover that is based on the Impreza hatchback, but comes with an expanded capability chassis with 8.7 inches of ground clearance, larger tires with 17-inch alloy wheels, larger front brakes, a larger fuel tank and special black wheel arch and rocker panel cladding.

Subaru notes, "The car clearly expresses "Fun to Drive", an integral part of automobiles' essential value, in its attractive, straightforward design. It boasts a new type of crossover design with larger, unique tires and wheels highlighting a good balance with the body's sharp, stable looks, which gives this new model distinctive product appeal. It's an excellent design that showcases Subaru brand's characteristics."

The newly-designed Impreza is attracting new buyers faster than any other car in the Subaru lineup. The fourth generation Subaru Impreza is all-new for the 2012 model year and the complete makeover is attracting buyers beyond the faithful loyalists. It gets new exterior styling that moves the Impreza into the twenty first century, and also gets a new stylish cabin.

The 2012 Impreza features a new powertrain as well. The all-new 148-horsepower 2.0-liter four-cylinder engine replaces last year's 2.5-liter. The new engine produces similar power and performance, but fuel efficiency has been increased by 36 percent. The 2012 Impreza 2.0i gets stellar fuel-mileage at 36 mpg highway with the CVT, which makes the Impreza the most fuel-efficient all-wheel-drive gas powered car on the planet.

Subaru says that the Impreza design changes have made a big difference in attracting new buyers. "The fourth generation of the Impreza, which made its debut in 1992, offers solid, stylish and universally-appealing exterior design and roomier cabin space realized by the extended wheelbase and significantly moved-forward A-pillar.”

“The model's product appeal is enhanced with the combination of attractive design and Subaru's renowned technological advantages that include improved fuel efficiency with the new generation Boxer engine, body weight reduction with the adoption of a newly-designed platform and enhanced crash safety technologies."

Subaru has seen great success with the Impreza and the all-new 2013 XV Crosstrek is already receiving awards for its design. The 2013 Subaru XV Crosstrek was nominated for the Good Design Special Awards among the top 100 candidates. The model will be on display at the Good Design Exhibition scheduled to be held from November 23 through 25 at Tokyo Big Site in Ariake, Tokyo.