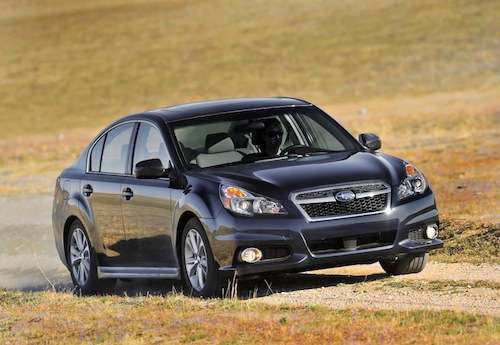 Get a sneak peek at the new 2013 Subaru Impreza and 2013 Forester with the just released online Dynamic Brochures.
Advertisement

On the heals of the 2013 Subaru XV Crosstrek and 2013 WRX STI dynamic brochures being launched, Subaru is giving buyers a sneak peek at the 2013 Impreza and 2013 Forester. Subaru has loaded 2013 Impreza and Forester Dynamic Brochures with a 360 degree view color selector, interactive demos, full feature details and videos of the two new models. The 2012 Subaru Impreza has had impressive sales numbers this year, and the 36 mpg 2013 Impreza should be a hit as well.

Things are changing at Subaru

The Impreza got a complete makeover in 2012 and the popular car was made even more appealing beyond the faithful loyalists. The Japanese automaker is changing its image from a car company who just makes all-wheel-drive wagons, to one that produces fuel-efficient cars that appeal to young buyers with an active lifestyle. Things have definitely changed at Subaru and the company moved into new territory last year with the all-new 2012 Impreza.

Subaru has traditionally been very conservative in their approach, but they stepped out with bold new styling that has reached out to a new brand of buyers. Subaru has succeeded in a big way with the Impreza. The 2012 Impreza received new exterior styling and a new stylish cabin as well.

Record sales for the Impreza

The sporty new Impreza is attracting new buyers faster than any other car in the Subaru lineup. The report from Subaru of America says as of July, the 2012 Impreza had a 159.73 percent increase YTD. That is a 23 percent increase over last years model numbers. Subaru certainly hit on the right formula with the new Impreza.

Part of the appeal is the exceptional fuel mileage of the Impreza. The 2.0-liter boxer engine achieves 27/36 mpg city/highway EPA estimated mileage. In a real-world test, the Impreza was driven from Denver, Colorado to Roswell, New Mexico and the Impreza made it the 505 miles on one tank with gas to spare. And that is achieved with all-wheel-drive. Subaru accomplished that with a new aerodynamic design that enables the Impreza to cut down wind resistance. The sporty car also uses the latest CVT automatic transmission technology.

The 2013 Subaru Forester offers the same combination of all-wheel-drive capability and adds even more versatility. The Forester comes standard with Symmetrical All-Wheel Drive and a balanced Subaru Boxer engine for exceptional handling and capability which match the Forester’s functional interior.

Subaru has given buyers what they want in the new 2013 Impreza and 2013 Forester and now they can go online and view a 24 page dynamic brochure in advance of deliveries of the two new cars.

For the 2013 Subaru Impreza brochure go to: http://subar.us/Vu6aFq

For the 2013 Subaru Forester brochure go to: http://dbrochure.subaru.com/soa-for-13-pr1