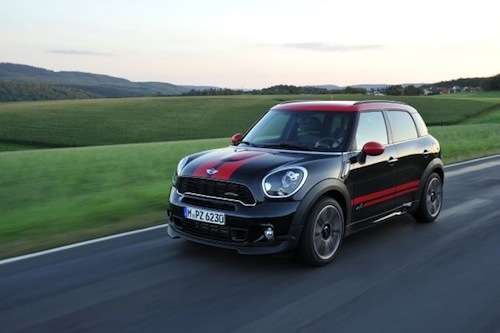 The all-new 2013 MINI John Copper Works Countryman performance model is being offered for the first time with MINI ALL4 all-wheel-drive. Now MINI driving enthusiasts can experience the combination of power and feel the transfer to all four wheels. This is also the first John Cooper Works model with four doors, up to five sears and a large rear hatch. The JCW Countryman is also fitted with the most powerful engine in the MINI model range.

MINI’s All4 All-wheel-drive is standard on the 2013 JCW Countryman and improves performance in wet or dry conditions and also helps negate torque steer. The MINI All4 uses an electromagnetic center differential to route power to the front wheels under nominal conditions and up to 50 percent of torque to the rear axle when additional grip is needed. The sport suspension on the Countryman has been tweaked and gets stiffer springs and dampers, and thicker anti-roll bars. The ride height has been lowered for additional performance handling, comes standard with 18-inch wheels and can be ordered with an aerodynamic kit.

The JCW Countryman is powered by MINI's turbocharged 1.6-liter I-4. The engine produces 211 horsepower and 207 lb-ft of torque which is an increase of 30 horsepower and 30 lb-ft of torque over the Countryman S model. The 1.6-liter uses a twin-scroll turbocharger and direct-injection. The internals of the performance engine have been reworked and includes a reinforced block and head; stronger pistons; sodium-filled exhaust valves; a larger intercooler, and includes performance intake, exhaust, and cooling systems.

BMW’s Valvetronic variable valve timing system has been added to the JCW Countryman engine for 2013. An overboost function temporarily increases turbocharger output, increasing the torque to 221 lb-ft between 2000 and 5200 rpm. The 1.6-liter twin-scroll turbo engine is mated to a six-speed manual and new for 2013 is an available six-speed automatic transmission, a first for a JCW model. MINI says the Countryman will sprint from 0-62 mph in 7.0 seconds.

Outside, the JCW Countryman comes with the JCW logo on the radiator and tailgate and front foglights are standard. Seven exterior paint choices are available and the Sport striping in white, black or red are optional. Inside the performance model comes with sport seats, sport steering wheel and special interior trim in Piano Black.

MINI hasn’t announced pricing on the 2013 John Cooper Works Countryman yet but look for the it to make a first appearance at the 2012 Paris Auto Show.