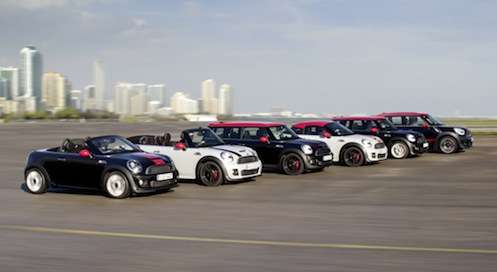 The entire MINI John Cooper Works lineup will get a new-generation engine that will increase efficiency.
Advertisement

Beginning in July, the 2013 MINI John Cooper Works models will be getting a new-generation engine across the lineup. BMW announced that the ultra-sporty JCW models will still use the twin-scroll turbo engine that makes them so exciting to drive, but they will now benefit from new technologies to increase efficiency without any sacrifice in power.

The new engine will be more fuel-efficient with lower emissions. In addition, BMW says the entire JCW lineup can now be fitted with an optional six-speed automatic transmission. BMW also announced that MINI’s innovative ALL4 all-wheel-drive system comes as standard equipment on the MINI John Cooper Works Countryman.

The new MINI John Cooper Works engine is similar to the outgoing powerplant and still features a basic 1.6-liter four-cylinder design that uses a twin-scroll turbocharger and direct fuel injection. A new addition to the engine will be a variable valve control, based on BMW’s VALVETRONIC system which promises improved drivability but with lower fuel consumption.

Peak output remains at 208 horsepower and 192 pound-feet of torque, and the overboost function allows this figure to be raised to 207 lb-ft for a short time between 2,000 and 5,200 rpm. The twin-scroll turbo develops more pressure than the MINI Cooper S. The The new limited-edition John Cooper Works GP is also new for 2013 and will offer even more power than this new-generation engine although BMW has not released horsepower figures.

Finally, the new addition to the line, the 2013 the MINI John Cooper Works Countryman, dashes from 0-60 mph in just 6.6 seconds--regardless of whether the power flows through the standard six-speed manual gearbox or the optional six-speed automatic, and the top speed is 127 mph.

Across the entire lineup, the new-generation engine gets better fuel mileage numbers while at the same time produces the same sporty driving experience. In addition to a performance oriented turbo engine, all JCW models come with a performance-tuned chassis, responsive brakes, electronic stability and traction control, an electronic differential lock and 17-inch light alloy wheels. The 2013 MINI John Cooper Works comes with unique looks and special features that accentuate the ultra-sporty feel both inside and out.

The 2013 MINI John Cooper Works will be in U.S. showrooms starting in July.