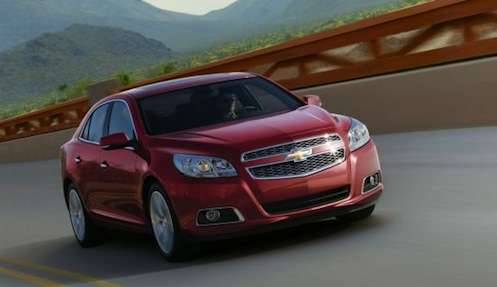 Chevrolet has announced pricing for the all-new 2013 Malibu and the midsize sedan will get a first-ever turbo.
Advertisement

Chevrolet has announced pricing and equipment details on the all-new 2013 Malibu and it’s coming with new powertrain options. Today's press release tells us that the mid-size sedan will be offered with a couple of new engines, one being a first-ever turbocharged four-cylinder. With many of the Malibu’s competitors offering turbocharged four-cylinder engines, the new turbo will help Chevrolet stay in the game.

This is the future of engines and Chevrolet needed this offering to stay competitive with the Hyundai Sonata, Kia Optima, Ford Fusion and VW Jetta. Only two trims are available with the turbo four-cylinder engine: the LT starting at $27,710 and the LTZ starting at $30,925.

The 2013 Malibu gets another new engine

The 2013 Chevy Malibu will also be offered with an all-new 2.5-liter EcoTec engine rated at 197 horsepower which is 17 percent more than the previous generation engine. Fuel mileage is expected to be competitive in the mid-30s. The engine will get the latest direct-injection and continuously variable valve timing and will come standard in the LS, LT and LTZ models.

Pricing on the Malibu is announced

The base 2013 Chevrolet Malibu will start at $23,150 in four-cylinder LS trim including a $760 destination charge. The 2013 Malibu 1LT ($24,765) includes a seven-inch color touch screen, Chevrolet MyLink with Bluetooth, USB and auxiliary input, and blue ambient lighting.

The all-new 2013 Chevrolet Malibu will be in showrooms this summer and the turbocharged variant will be available later this fall. We''ll see how the new Malibu turbo does against some stiff competition in the mid-size segment.

Panasonic Updates Profit Forecast, Noting How Much Tesla Batteries Help The Jump
2022 Porsche 911 GT3 Laps Nurburgring in 7:04 With Journalist Behind The Wheel
END_OF_DOCUMENT_TOKEN_TO_BE_REPLACED