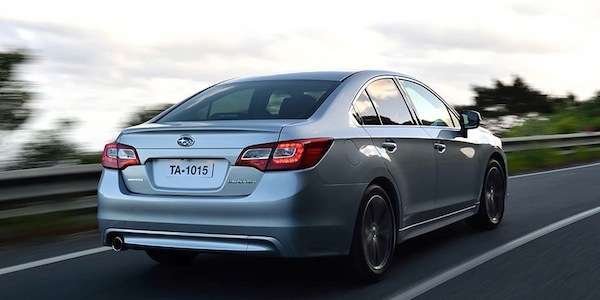 Is a 2.0-liter turbo WRX engine in the works for Outback and Legacy?

Subaru could axe the 3.6-liter six cylinder and put the 2.0-liter WRX turbo in the Outback and Legacy.
Advertisement

China already has the 2015 Subaru Outback with the 2.0-liter turbo engine, and it could be the new powerplant in other global markets as well. In an exclusive interview with CarAdvice, Yoichi Hori, deputy general manager of Subaru’s engineering department, told them that Subaru may axe the bigger 3.6-liter six in favor of a more efficient turbocharged four-cylinder powertrain in the future. This could be a variation on the new Subaru 2.0-liter turbocharged engine that’s in the WRX.

Yoichi Hori also told CarAdvice that the 3.6-liter six-cylinder in the 2015 Outback and Legacy may not be around much longer and Subaru may go to a smaller displacement engine. “Our research said the six-cylinder model is decreasing in the world,” Hori said. “So that’s why probably in the future, many companies will offer the smaller displacement with a turbocharger, or diesel, or hybrid.

Subaru does offer the 2015 Outback wagon and Legacy sedan with the 2.5-liter naturally aspirated boxer engine and when asked if that would be the new turbo engine, Hori answered, “Maybe a smaller displacement, because that’s going to be more suitable for the market.”

Maintenance costs has been the deciding factor

Subaru’s engineering department chief said the 3.6-liter boxer is a trusted engine, and one of the main reasons it’s still used in the new-generation Legacy and Outback models and not replaced by the 2.0-liter WRX turbo variant is because of maintenance costs. Hori said, “One of the biggest reasons is the maintenance costs as the turbocharger makes higher performance, so that’s why maintenance such as oil changes cost more than six-cylinder models.”

Subaru will also likely expand the use of direct-injection engines. They are also considering the use of cylinder deactivation and a lean combustion cycle in a new engine they are developing. They could use all three in the same engine depending on the market and the different regulations in the different countries.

Hori said Subaru doesn’t want to lose the distinctive engine characteristics that exist now in their vehicles which is sporty driving dynamics. They may also develop a plug-in hybrid model. He said, “For example, we could just install direct injection and lean combustion and then have another model such as a plug-in hybrid to complement it. We are having this kind of discussion.”

There’s many changes coming to the next-generation Subaru engines. Look for a new Subaru 2.0-liter turbo engine that is being developed for the global Outback and Legacy models. Stay tuned.

Tesla Contemplates A New Strategy for China Retail even As Sales Boom
Jay Leno on Elon Musk & EVs: “I Think He Should Get ... Credit"
END_OF_DOCUMENT_TOKEN_TO_BE_REPLACED