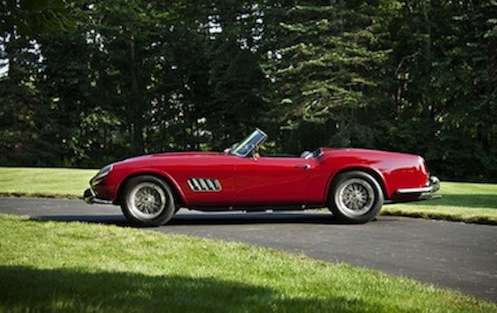 An extremely rare 1960 Ferrari California has sold for a record amount at the Pebble Beach auction.
Advertisement

The weekend in Pebble Beach was very successful for Ferrari as they saw both new and old examples get much attention during the Monterey car week. The new included the world debut of the stunning 2013 Ferrari F12 Berlinetta and the old saw a 1960 Ferrari 250 California Spider Competizione selling for a record $11,275,000. The extremely rare car is one of nine alloy-bodied LWB California Spiders built for competition.

An anonymous collector shelled out the record amount over the weekend and will put it in a private collection. The rare race car has had only two owners and comes from the Sherman M. Wolf collection. Wolf purchased the 1960 Ferrari 250 California Spider Competizione from the original owner back in 1979 and owned the car until last weekend.

The 1960 Ferrari 250 GT LWB California is powered by a 2,953 CC SOHC Tipo 168 V-12 engine producing 270 horsepower. It was built new for competition and came standard with disc brakes and covered headlights. The chassis number is 1639 GT. The rare race car has a distinguished concours history having won many awards in its time.

Ferrari reports that at the same auction, other vintage Ferraris from the same collection came under the hammer: such as the 1985 288 GTO which sold for $1 million, and a 340 MM Spider, that sold for almost $4.5 million. Ferrari’s continue to be hot among collectors and are bringing record amounts this year. We reported that the Sterling Moss 1962 Ferrari 250 GTO sold for a world record $35 million in May. The famous green car was one of 39 GTOs that were produced from 1962 to 1964.

While most cars are depreciating assets and are not good investments, many Ferrari’s are the most sought after vintage cars by collectors. According to data compiled by the London- based Historic Automobile Group International (HAGI), prices for classic Ferraris increased 4.82 percent in the first quarter of 2012. Established collectors and wealthy individuals seek to diversify their investments and Ferrari’s are the perfect investment.

For individuals looking to restore their vintage car, Ferrari has one of the most extensive restoration facilities in the world for classic Ferrari’s. Ferrari Classiche was established specifically to provide restoration and maintenance services, technical assistance and Certificates of Authenticity to owners of classic Ferraris. The restoration facility is housed in the former Ferrari foundry and the offices and workshop cover 950 square metres within the Maranello factory. Ferrari Classiche was officially opened by Ferrari President, Luca di Montezemolo, in July 2006.

Rare cars like the 1960 Ferrari 250 GT LWB California will continue to bring high dollars at auction, and if you have the money, they are a great investment.