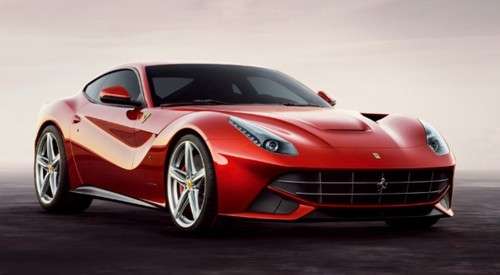 Since it made its world debut in Geneva in March, much has been written about the 2013 Ferrari F12 Berlinetta. And now one of Ferrari’s fastest machines will make its North American debut at Pebble Beach this weekend. The town near San Francisco has always been a special place for the Italian automaker where thousands come each year to see the latest creations from Maranello and some of their legendary cars.

The 2013 Ferrari F12 Berlinetta is sure to draw much attention during the weekend events and is a special sports car. The F12 cannot be compared to any normal car, and it’s even on a higher level when compared to Ferrari’s fastest machines. The 2013 F12 Berlinetta boasts Ferrari’s most powerful V12 at 730 horsepower.

It gets a considerable 120 more horsepower than the Ferrari 599 GTB it replaces. And Ferrari was able to lower the weight by 129 pounds to make it even quicker. The 2013 F12 will rocket from 0-62 in just 3.1 seconds. Or try withstanding the G’s while the supercar goes from 0-124 mph time in 8.5 seconds, which is quicker than a McLaren F1. The all-new 2013 F12 has been praised for its exceptional handling and extreme performance.

Ferrari has put every bit of technology into the F12 that they can come up with. The supercar gets carbon-ceramic brake discs and a double-clutch gearbox along with an electronically controlled differential and electronic dampers. The F12 also gets a completely new design for the rear suspension and special performance tires developed with Bridgestone, Pirelli and Michelin’s help.

Ferrari has organized a series of special events to showcase the powerful F12 this year at Pebble Beach. An FF supercar will be handed over at Pebble Beach and the car has been personalized by famous British golfer Ian Poulter. The car’s exterior has been painted a triple-layer “Sabbia” color, while the interior is made of black Poltrona Frau leather with tartan pattern, the characteristic of Poulter’s next clothing line collection. Ferrari says the the British golfer will receive his FF during a special evening with the participation of Ferrari CEO Amedeo Felisa.

A Gooding & Co auction will be held at the Pebble Beach festival with some special Ferrari’s being auctioned off. The catalogue shows a 1973 365 Daytona Spider certified by Ferrari Classiche and models such as the 1960 250 California Spider Competizione passo lungo and the 1955 857 Sport, once owned by Andy Warhol. The cars could bring as much as 10 million dollars or more.

Look for the 730 horsepower 2013 Ferrari F12 Berlinetta from Maranello to draw much attention as it makes its U.S. debut at Pebble Beach.