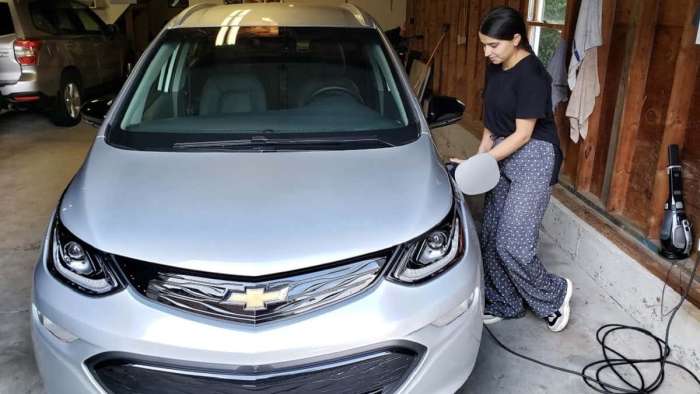 This large electricity provider now pays EV owners not to charge. The best news is that it’s an uncommon time of day at which to charge up anyway.
Advertisement

National Grid, a large electricity provider to Massachusetts, New York, and Rhode Island, will now pay you to not charge your EV. That’s right, if you opt to not charge up your vehicle during peak electricity usage events, you will be paid by your utility. This is just the latest way EVs can save you money.

Most EV Owners Charge At Home
Most EV owners charge their vehicles at night after they return home for the day. It’s one of the best things about owning an EV - your “pump” is in your garage or driveway. It’s convenient, and very affordable to power a vehicle this way.

Peak Electricity Times and Charging
The way the plan works is this; If your EV is on the charger between 2 pm and 7 pm on a day when the grid is stressed, National Grid will send a signal to your smart charger and interrupt the charging. When the peak load on the grid has dropped, the provider will send a signal for your charging to resume. Here’s where the moral quandary comes into play. You have to be charging during peak hours to be paid to stop.

The Moral Quandry
So, let’s say you notice a heatwave has struck the region and you happen to be home and your car is not charging. Let’s say it was at 75% state of charge and you were planning to plug in that evening or skip charging for the evening. If you see the peak demand notices, you could then plug in and be paid to stop. You only get paid if you are charging.

$20 Not To Charge
The money is pretty good. National Grid will pay those charging using a Level 2 charger $20 if they interrupt your peak hour charge event. And there are a lot of opportunities to earn this money. The provider says it typically has about 40 such days per year when this would be needed. Currently, Ford, GM, and BMW vehicles are eligible for the plan and National Grid is planning to add Tesla, Nissan, and Honda to the list.

Can The Grid Handle More EVs?
This plan is just one more example lending some credibility to the claim that if the U.S. vehicle fleet went from a single-digit percentage of EVs to, say 50% EVs, the existing infrastructure would have difficulty handling the added load. Utilities already issue requests for EV owners not to charge in other states such as California. With older nuclear plants being commissioned and not replaced, massive suppliers of electricity are being removed from the grid each year in America. When Massachusetts' Pilgrim Nuclear Power Plant shut down two years ago, 670 megawatts of power were removed from the grig's capacity. It will be interesting to watch if this policy eventually shifts from the carrot to the stick and if electricity costs will go up for folks who don’t toe the line with regard to off-peak charging.

You can learn more about National Grid’s plan at this link. Tell us in the comments below if you would participate in such a plan.

DeanMcManis wrote on July 20, 2021 - 1:46pm Permalink
This a nice perk, but I am not sure who it is aimed at helping. Most EV owners who charge up at home with an installed 240V EVSE do so overnight. Both the EVSE and the car's internal charger have software controls with timers built in. Most power companies charge more for electricity during peak, or partial peak times, as opposed to off-peak, (usually from 12-7AM). So you just plug in when you get home, and the car automatically recharges overnight, while you sleep. I guess that this payback program is targeting people who normally don't know (or care) about automatically recharging their EV on a timer, off peak hours.
John Goreham wrote on July 21, 2021 - 8:00am Permalink
I agree, the timing is odd. It seems like an unlikely time of day for large-scale EV charging.