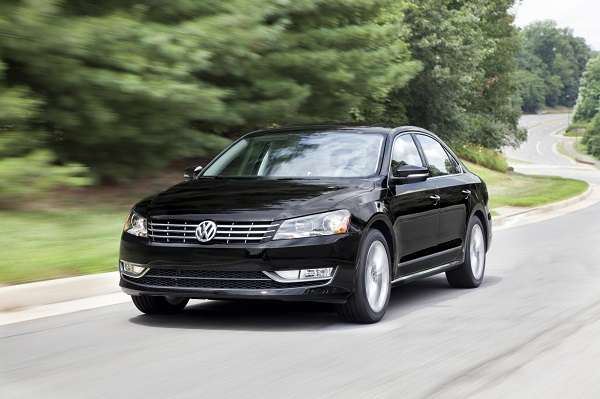 Volkswagen in America is danger-close to being irrelevant. In an effort to help turn things around VW is moving to all turbo engines. The bad news is the new engines are not even as fuel efficient or as powerful as the competitor's non-turbo engines are.
Advertisement

Volkswagen announced this week that it is moving away from normally aspirated engines and towards all turbocharger-equipped engines. VW said in a statement that in the next year or two upwards of 90% of its engines sold in cars in America will be turbocharged. The new turbocharged 1.8 liter engines will replace the uncompetitive 2.5 liter five-cylinder that VW has made its base engine in everything from the Golf to the Passat. VW is claiming some big gains in torque and efficiency with the new engines, but they will still trail the industry leaders like Honda and Toyota in almost every measurable way.

The new 1.8 liter gasoline engines are direct injected (as almost every new engine in the US market is now) and turbocharged. In the Passat, VW claims the mileage with the 6-speed automatic transmission will bump up to 34 highway and 28 MPG overall. So compared to the current Accord base model, the base Passat will soon be 2 MPG less efficient on the highway and get 2 MPG less combined. And the Accord is not even the class leader in highway mileage. The Altima and the Mazda 6 now get 38 MPG with their base four cylinder (non-turbo) engines and are just as fast as the new Passat will be. How this new small turbo will improve sales is a mystery. The Accord’s V6 model gets the same highway mileage as this new Passat and it has 108 more horsepower.

The real reason Volkswagen and other manufacturers are all moving to the turbocharged smaller engines is that they do better on the EPA test cycles than other engine options at equivalent cost to the manufacturer. For most passenger cars the smaller turbos don’t match the power and efficiency of the non-turbo market leaders.

Sales are down at Volkswagen and the automaker really has only tiny market share in the categories it values most. (Please see our previous report) In the month of October the entire VW America brand sold only 28,129 vehicles. That makes VW smaller than Subaru. With sales down a full 4% in October, a month when most automakers were announcing record sales and profits, VW is now headed in the wrong direction. The Passat sedan was down 13% in October with sales of just 7,258 units. The leaders in this category sell about 4 times that amount of mid-size sedans. The new Toyota Corolla and other leading economy-priced mid/compact sedans are outselling the Jetta and Golf combined at a ratio of about two-to one. In the hottest growing segment of compact crossovers, sales leaders like the Toyota RAV 4 and Subaru Forester are outpacing VW’s oddly named, and over-priced Tiguan by a ratio of almost ten to one. Comparing this brand to Toyota in America, with whom VW competes head to head globally for the title of top producing automaker, the Toyota Camry alone outsells all of Volkswagen in the US.

Volkswagen is also at a disadvantage to the sales leaders in the US market when it comes to manufacturing and in-sourcing. VW is careful to always say ‘North American made” since its engine plants are in Mexico, not the US. The VW Tennessee plant gets a lot of press, but the truth is that VW is pouring money into its facilities south of the border. This is not really a big deal for VW since even Chrysler fibs about its flagship when it comes to the “American made” tag. What VW needs to worry about more is the fact that although it is hyping its new engines as advancements, the leaders in the category are beating VW in the all-important efficiency war being waged in America, and they are doing it without turbos.

Aaron Turpen wrote on November 12, 2013 - 11:31am Permalink
I just finished a week-long test drive of the Passat S with the 5-cylinder gas engine and was underwhelmed. What VW needs to do is forget changing their engines (those are fine) and instead start making their cars interesting again. The VW Beetle Convertible I drove earlier this year as a press loan was AWESOME fun. The Passat TDI (diesel) was also great. But the Passat is B O R I N G in all respects outside of the powertrain. The interior is unremarkable, the exterior is yawn-inducing, and the price tag versus options is not competitive. VW's problem is that they seem to think they can sell cars here based purely on their nameplate and Euro-cred. That might work for Audi, but not for the lower-end VW offerings. Think of it this way: I can buy the Passat S with Appearance, as I drove it, for about $25k and get 31mpg or I can buy the Mazda6 in comparable packaging for $26k and get 40 mpg and a far sportier ride and drive in a way better looking car.
John Goreham wrote on November 14, 2013 - 1:57pm Permalink
Exactly. VW seemed to look at the Camry and misunderstand that the buyers wanted the boring aspects. They missed the point.