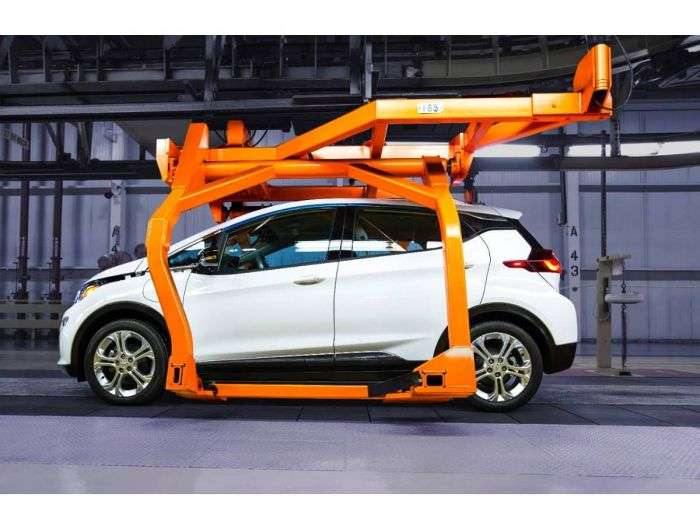 The Chevy Bolt is now in third place in sales for 2018 among compact electric vehicles. Chevy plans to take action.
Advertisement

You can’t sell ‘em, if you don’t build ‘em. That has been one very annoying fact to electric vehicle advocates over the past five years. Although satisfaction is very high among owners, every manufacturer of electric vehicles constrains production as part of their strategy. General Motors is no exception.

In an interview with CNBC staged at an energy conference this week, Mary Barra, GM’s CEO, said that GM sees an all-electric future, plans to go with battery-electrics, not plug-in hybrids (sorry Volt fans) and says that owners of Volts and Bolts are very satisfied customers. They love their EVs. Yet, look at any EV forum and shoppers all over America are frustrated that cars like the Bolt and Volt are so hard to find in inventory. Ms. Barra says GM is planning to address that.

Barra says, “At General Motors, we believe in an all-electric future.” She went on to say, “We’ve had really strong feedback form customers on the Chevy Bolt EV, and so we are announcing that we will be increasing our production.” When asked specifically by how much, Barra replied, “We haven’t given specific numbers. We are reacting to customer interest and demand.”

For those under the impression that the Tesla Model 3 cost less, please remember that as of today, $45K has been the entry price for the Model 3 after 9 months on the market.

Markley wrote on March 8, 2018 - 12:45pm Permalink
I wouldn't of snubbed the European market. I would be actively working to increase high speed chargers. I would have dealers who know and want to sell the product.
Randy wrote on March 8, 2018 - 4:22pm Permalink
Reliable usable year-round nation wide L3 roll out.
Ivan wrote on March 8, 2018 - 5:11pm Permalink
I’d continue to badge the Bolt as a Ampera-e and have PSA sell it in Europe under the Peugeot brand (versus the disappearing Opel brand). I’d also produce the Bolt at the Shanghai GM factory and rebadge it as a Buick. This factory already makes the CT6 PHEV and Buick Velite 5 (Chevy Volt for China). Have the Bolt sell in China. The other step is already being done by GM—a “commercial version” of Bolt and autonomous Bolts. Would be great to showcase SuperCruise on Bolt, but I suppose it would have to appear on Cadillac first before being launched in a Chevy. But what if SuperCruise was available on a Buick version of Bolt?
Antonio wrote on March 8, 2018 - 5:11pm Permalink
I really don't like that the Prius Prime is even considered an EV and also top seller right now. Even the Volt isn’t an EV. Toyota doesn’t even have any full electrics that they make or have made in significant numbers but they invested in hybrids for over a decade, unlike GM and now those Prius drivers are adopting the Prius Prime. GM has dropped the ball so many times in this category, it’s astounding.
Phill wrote on March 8, 2018 - 8:25pm Permalink
The strategy to surpass Tesla with Bolt sales would be to get the Chevrolet dealers on board TO PUT IN FAST CHARGERS THAT WE TURN ON WITH OUR CHARGE POINT CARDS 24/7. Tesla can use our 240v chargers because they have the same plug BUT THEY PUT A DIFFERENT PLUG ON THEIR FAST CHARGERS! Tesla has put in large fast charge stations near the Interstate systems across the country & our Bolt can't use them! GM also needs to get Buick on board with a Bolt style Encore so their dealerships would also have charging stations. Put two Bolt batteries under a GMC truck & SUV & then ALL GM dealers would be on board with chargers. IF GM IS BRINGING OVER 20 MORE EVs BY 2023 THEN GET WITH PUTTING IN THE NEEDED CHARGING STATIONS. So many gouger charging station out there are wanting $2 per hr or twice to three times the price of gas. But, with the Plug Share app we can find the FREE ones or $2.50 for a complete charge.
John Goreham wrote on March 9, 2018 - 11:00am Permalink
Excellent commentary Phill. I'm glad to hear from an EV enthusiast that I'm not the only one noticing that public chargers seem to be priced above what gas would cost to put into a common ICE car.