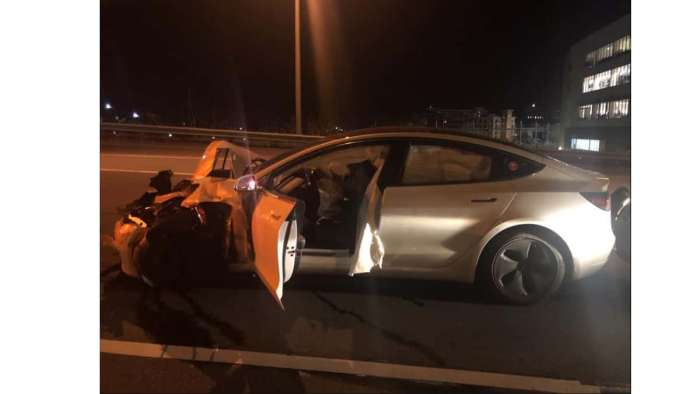 Tesla Model 3 On Autopilot Hits Yet Another Police Vehicle - Why Won't They Stop?

Tesla's Autopilot system has an affinity for rear-ending first responder vehicles working on our highways. The latest crash is in Connecticut.
Advertisement

Yet another Tesla on Autopilot has crashed at full-speed into the back of yet another first responder's vehicle. Tesla cars seem to have an affinity for finding and smashing into police cars and fire trucks stopped doing their work on our roadways. Why can't Tesla, who claims to be about to release a "full-self-driving" version of its driver-assist technology, make it stop?

The Latest Tesla On Autopilot Crash

The latest crash comes this week. Police stopped to assist a stranded motorist on the highway. Not only did police have their emergency lights flashing, but they also had used road flares to signal to alert motorists than they should slow down and proceed with caution.

Related Story From 2018: Another Tesla On Autopilot Hits Another PoliceVehicle - You Can't Make This Stuff Up

Police say that an inattentive driver in a Tesla Model 3 using Autopilot, Tesla's "self-driving" driver-assist system then slammed into their patrol car. And the Tesla then kept on driving. Connecticut State Police report that after the crash, "The operator of the Tesla continued to slowly travel northbound before being stopped several hundred feet ahead by the second Trooper on scene."

Police say that the driver admitted to using the Autopilot system at the time of the crash and that the driver was not paying attention to the road, but relying on the Tesla system to keep himself, police, and other motorists safe.

Tesla's Autopilot has been in control of Tesla automobiles during numerous crashes, with multiple fatalities. Tesla claims that drivers are supposed to remain in control with hands on the wheel at all times. However, Elon Musk himself has been videotaped not doing so, as has his (former) wife.

Tesla's Autopilot system has yet to kill an officer, AMT, or firefighter on duty, but it seems like it is just a matter of time with so many past crashes of this type. Connecticut State Police say with regard to this latest crash, "Fortunately, no one involved was seriously injured, but it is apparent that this incident could have been more severe."

The occupant in the Tesla operating on Autopilot was issued a misdemeanor summons for Reckless Driving and Reckless Endangerment according to police.

Torque News has reported on Tesla Autopilot crashes and deaths since 2016. Here is a list of related stories:

You can view additional images and read additional facts about this latest Autopilot crash at the CT State Police Facebook Page.

LG's New EV Battery Plant Is a Welcome News for Tesla
Tesla Giga Berlin's New Hurdle: It's Not Only the Gov't, but Now Tesla Itself
END_OF_DOCUMENT_TOKEN_TO_BE_REPLACED