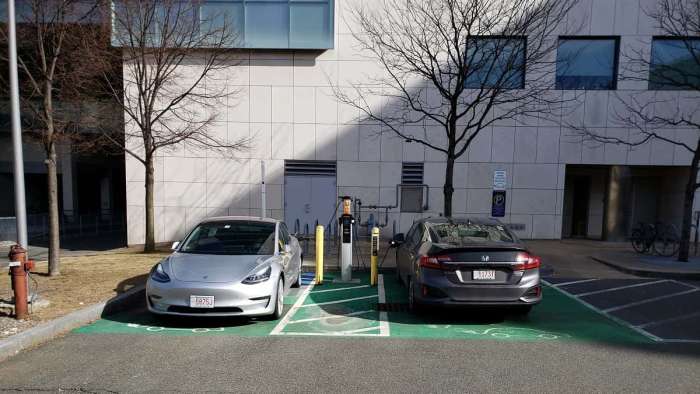 In our second installment of "Look what the EV-advocacy press is saying about PHEVs," we highlight a well-researched story from CleanTechnica.
Advertisement

Among the many automotive publications from which one can choose are many that are advocates for their preferred type of vehicle. Here at Torque News, we opt not to advocate for one type of vehicle or one type of technology. That said, many of us own and drive green vehicles and many of us also have high-performance vehicles. And pretty much everything in between. So, we find it very interesting when the battery-electric-or-bust publications post a well-researched, well-constructed story on a technology other than battery-only cars.

The Case For Plug-in Hybrids Part One
Our prior example of this was a story written by an early adopter, EV-advocate, and EV consultant writing for Inside EVs. His story was unusually well researched and covered the disconnect between the public charger network's reality and what would be needed for the widespread adoption of EVs. Yes, many electric vehicle owners today charge primarily at home. The problem for widespread adoption is that a substantial percentage of the U.S. vehicle-owning population does not own a "home." They live in an apartment, condo, or other shared space, possibly rented, where an at-home charger is not a viable option. EV adoption is in its pre-infancy. 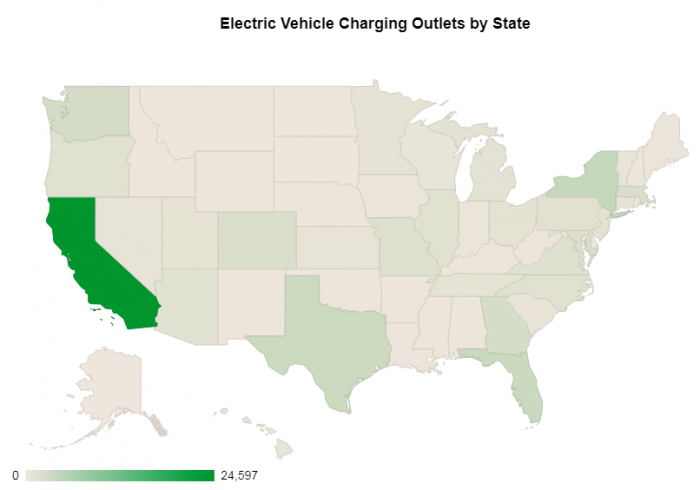 The Case For Plug-In Hybrids - Part 2
The latest story comes to us from Jennifer Sensiba writing for CleanTechnica. Her story highlights just how useful a plug-in hybrid electric vehicle (PHEV) can be for those who drive long distances. She makes the argument, correct in our opinion, that PHEVs have many advantages. PHEVS are electric vehicles that can drive distances under about 50 miles on electric power alone, but can they also be operated as efficient hybrid-electric gasoline-powered vehicles for hundreds of miles if need be. She points out that although public chargers are growing in number in some areas, there are states without a (private) Tesla Supercharger and states without any meaningful coverage of public superchargers. Her observations on road trips are interesting. She added the charge-up time to long-distance road trips. Most EV-advocacy stories downplay the 30-minute per 200 mile charge time needed for BEVs.

Leaf Owner Must Own Second Vehicle - Misses Her PHEV
Ms. Sensiba recounts her own personal story of how she cannot use her Nissan Leaf to go all of the places she wants to go. So, she has a second liquid-fueled vehicle. A gas burner. She points out that she misses her Chevy Volt extended-range electric vehicle (PHEV). It enabled her to own one less vehicle and was a very green car. She says, "While going fully electric is a lofty goal, it’s going to be a tough sell in the near term for most people and possibly for 10 or more years for people living outside of urban areas. Nearly anyone with access to electricity at night can comfortably buy a PHEV today without the disadvantages, and still deliver most of the advantages of an EV." 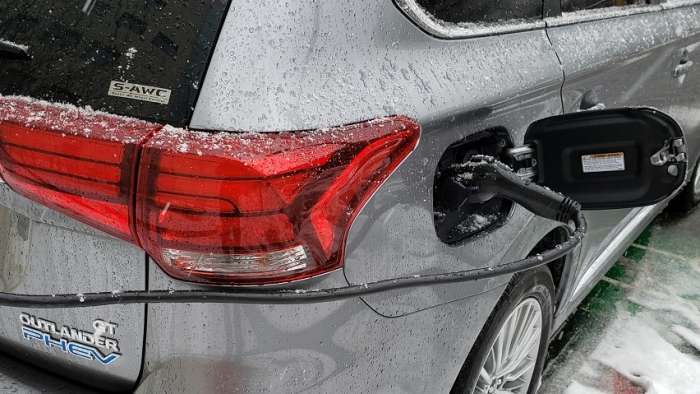 Ms. Sensiba concludes, "Instead of demanding purity and saying PHEVs aren’t good enough, we should be welcoming them." And with the Toyota RAV4 Prime PHEV and the Ford Escape PHEV about to join the Mitsubishi Outlander PHEV, practical, affordable, green vehicle choices in America are about to expand considerably.

Again, don't take our word for it when it comes to PHEVs. Take the word of EV early adopters who own and drive battery-electric vehicles. And who publish long-format, well-researched stories in EV-Advocacy publications.

Image Note: Map of EV-chargers courtesy of the U.S. DOE.

DeanMcManis wrote on February 4, 2020 - 1:17pm Permalink
Well, I'm sure that you knew that I would chime in on this topic. Having owned/leased Three Chevy Volts, and currently doing my daily commute with a Cadillac ELR EREV/PHEV. I am an advocate for plug in hybrids. A fatal flaw of people who subscribe to the notion of a BEV-only world is simply that car owners and their personal needs and situations are often unique. Right now more than 9 out of 10 car and truck owners in the U.S. drive vehicles that only run off of fossil fuels, and do not have an electric motor to drive the car. Which means that there are many millions of buyers who need to be shown the advantages of adding an electric motor to your car. And I think that can be done with showing them a hybrid or a plug-in hybrid, or a battery-only vehicle. Plug-in models are just a better fit than regular hybrids or BEV (Battery Electric Vehicles) for some car owners. From my view, each electric technology has it's benefits and drawbacks, as do gas-only cars and trucks. After owning several plug in hybrids though I really like the option of having a pure electric car 90% of the time, but that same car can work as a hybrid for longer trips (with the flip of a switch) whenever more driving range is needed.
John Goreham wrote on February 4, 2020 - 2:49pm Permalink
Well said, Dean. I am starting to sense a bit of a shift at the advocacy publications. Maybe I'm just looking to find what I wish to see.
Mike Carter wrote on February 5, 2020 - 3:47pm Permalink
John, the marketplace has already decided the future of PHEVs vrs. EVs. Our family has owned "electrified" vehicles since 2001 - hybrid, PHEV, and BEVs. The PHEV was an abomination. I know a guy with a Mits PHEV Outlander under warranty with a broken CHAdeMO system - Mits won't fix, saying they do not warrant the use of the vehicle on the public charging network. So it is just fossil now. Yes, if you live in SD, Idaho, Montana or some such place a PHEV might be an excellent step up. But as a species, we have to stop burning stuff for transport and power. There is no problem in most of the US driving long distance in BEVs on major highways. Your figures on miles/30 minutes are dated. What Leaf did the PHEV convert have? Probably not the 62kWh version. Do you have any ties to ICE mfg or oil companies that you are not disclosing? I have no financial connection with any BEV maker.
John Goreham wrote on February 5, 2020 - 8:49pm Permalink
Nope. No deep state conspiracy or brown bag payoffs here we are ready to admit to. Other than my lucrative board seat at Burmisa, I have no official connections to the fossil fuel megalopoly. You may want to ask around about those two writers at Inside EVs and Clean Technica though. There could be some double agents among the EVangelists. ps - Like automakers, I'm hoping CHAdeMO goes away. It makes my hands hurt trying to capitalize it.
DeanMcManis wrote on February 6, 2020 - 12:50am Permalink
It really is funny to me that just because GM killed it's EREV products that BEV evangelists assume that PHEVs are over. The line is that PHEVs were just a transition technology (and similarly I guess that you think that hybrids are also about to be phased out of production). Well the opposite is true with EV growth across the board. The truth is that we will probably have hybrids and PHEVs for at least another 10 years for the simple fact that they suit the needs of more buyers than BEVs do, and importantly the needs of the 95% of car owners still have gas-only cars. BEV advocates that shoot down hybrids and PHEVs are shooting themselves in the foot because those 95% gas-only vehicle owners only hear that there are flaws in electrification, and their next car will be gas-only again. I suspect that many BEV evangelists are actually the ones being manipulated by the oil companies, because they are doing their dirty work, instilling doubt about electric automotive technologies instead of simply educating people about the benefits of electrical motors in all cars. And reinforcing the fact that every technology that reduces our massive dependence on oil is a step in the right direction. Don't fight over the table scraps on the ground with EV enthusiasts who should be your allies, go for the lavish feast on the table replacing fossil fuel ONLY vehicles.
John Goreham wrote on February 6, 2020 - 10:03am Permalink
Well said, Dean. Add to that the fact that the top-selling EV model Priced below $35K is a PHEV (Prius Prime). Add to that the fact that Toyota hybrids are increasing in sales, not decreasing. The RAV4 Prime will be a very interesting test case later this year. I'm rooting for the Escape PHEV as well, but having spoken to Ford's employees about it I don't see a lot of confidence there. The Escape line overall is struggling to keep up in the largest automotive segment in America.
Mike Carter wrote on February 14, 2020 - 9:32pm Permalink
Gosh, John - we agree on something. As a former Escape owner and a recovering Ford PHEV lessee (C-Zero), I have no confidence in Ford's ability to mash up engine, gas tank, battery, and electric motor into anything I would want to drive. The "Mustang" Mach-E looks fun, though. What do you think of Conservative PM Boris Johnson banning PHEVs in UK after 2035? Not even Norway has gone that far (yet).