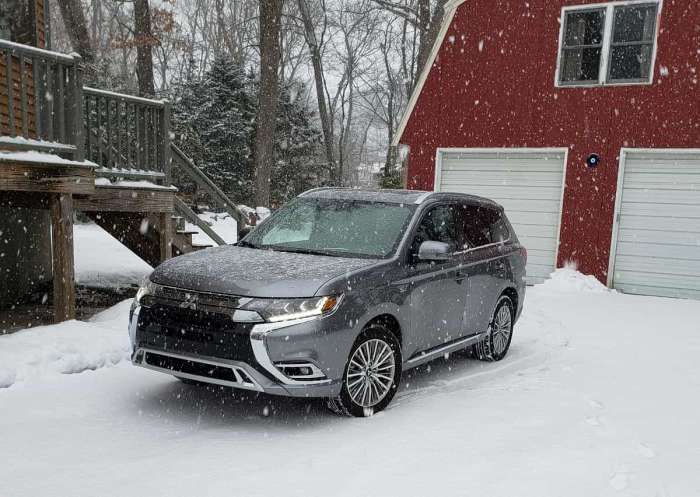 We test the Mitsubishi Outlander PHEV and find that it has the best combination of family-friendly features in our green car market.
Advertisement

We were fortunate enough to test the 2019 Mitsubishi Outlander PHEV GT S-AWC this week and found it to be one of the best EVs on the U.S. market. We used it to commute from the "second ring" of suburbs around the Boston -Cambridge Mass. area into the city using only electric power. When we needed unlimited mileage for a 5 hour college kid pickup trip, the Outlander PHEV worked great as an AWD family hybrid crossover - with zero charging hassles. This is the perfect formula for cold-weather green vehicle shoppers with a family. This may seem crazy in the modern age of electric vehicles, but the Outlander PHEV is the only affordable AWD crossover with a plug for sale in this country.

The Mitsubishi Outlander, in general, is an easy crossover to love. Every trim offers a great value and has features that many higher volume vehicles don’t. For example, Android Auto, which you won’t find in any trim of the all-new Toyota RAV4. At the higher price point, the Outlander PHEV includes heated leather seats (you won’t find those in a Tesla), a heated steering wheel, a great infotainment system, and all-wheel drive. 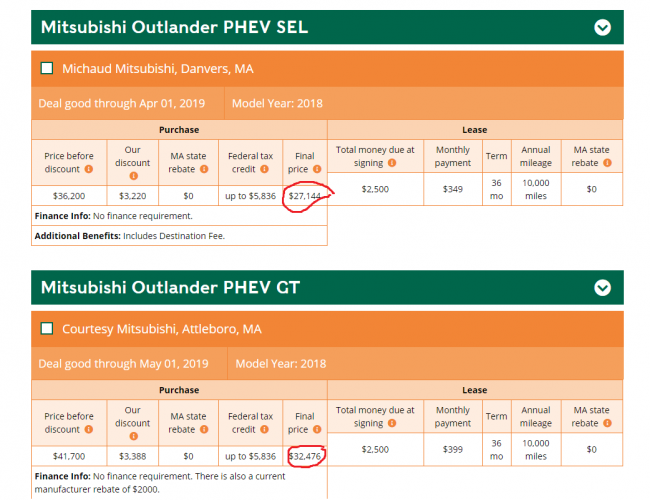 The electric trim, the Outlander Plug-In Hybrid Electric Vehicle (PHEV) is no exception to the Outlander line's great value. We tested the more expensive GT trim that has an "as-tested" price (including destination and handling) of $42,625. That's all imaginary because no green vehicle shopper will end up paying that price. After incentives and dealer discounts, the Outlander PHEV sells for between $27K and $33K here in our test area of Massachusetts. If we use the Tesla gas savings formula, the price comes to twelve cents. 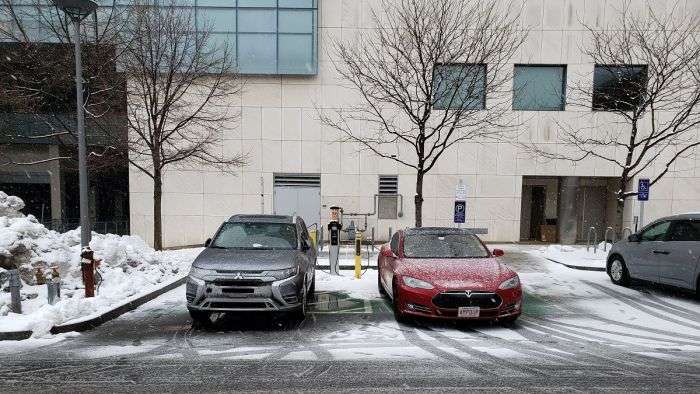 Living with the Outlander PHEV is super easy. The weather here in New England was typically lousy during our testing. Snow, sleet, ice, potholes, traffic, and the rest of Boston-area driver challenges were on full display. The Outlander handled it all with zero issues. We’ve tested all of the affordable EVs for sale and can honestly report that the Outlander PHEV has the shortest learning curve. Frankly, there is not much to learn. 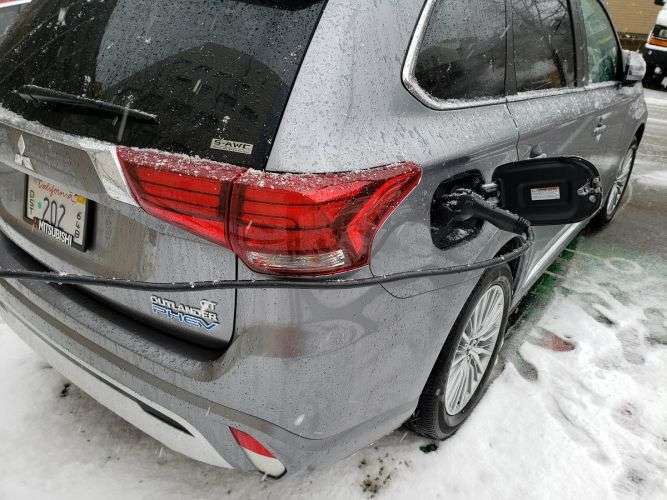 Unlike some pricey EVs we’ve tested, using the Outlander’s 115 Volt charging cord was a snap and it worked normally. We added back about 3 or 4 miles per hour on the charger. On a ChargePoint public charger, the Outlander also worked with zero fuss, adding about 6 miles of range per hour. You won't need a special expensive charger installed at home. The Outlander PHEV charges to full while you sleep using a regular plug. 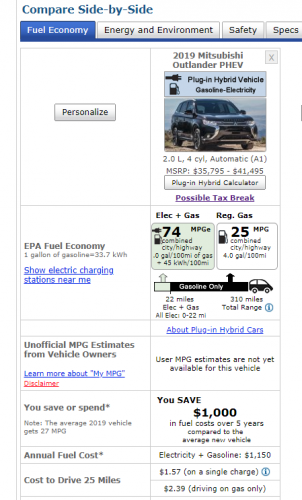 Like all EVs, the Outlander PHEV is super quiet and the electric drive is easy to fall in love with. The feeling is just different with electric cars, and it wins over anyone who tries one. We did our best to use the approximately 21 miles of electric-only drive as much as we could. When the range was depleted, the Outlander is still quiet and smooth unless you push it around. We could not accurately measure our fuel usage when on hybrid mode alone, but the 29 MPG displayed by the vehicle seemed about right based on our fuel consumed and miles traveled. If you want a sporty AWD crossover Tesla and Jaguar have some fantastic ones for between about $80K and $140K. Right now, there is nothing in between. That is a gap Tesla says that it can fill at some point in the coming years (or decade). We suspect Honda may get there sooner. Adapting the Clarity's drivetrain to a CR-V-like crossover would be a snap. 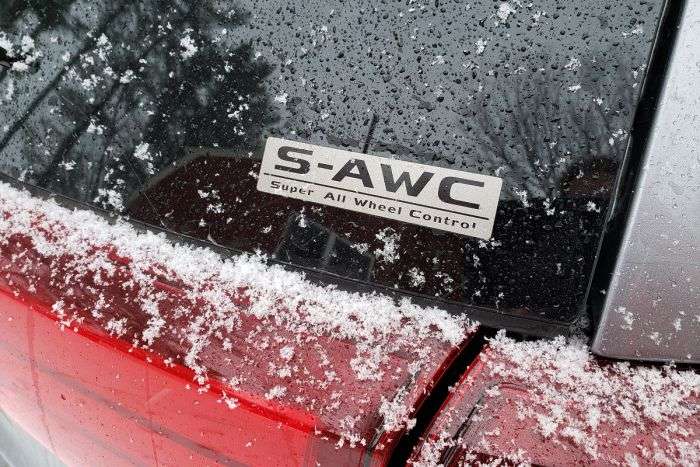 Having tested so many EVs in cold weather we now assume that the advertised range will be meaningless and that charging will also take a bit longer. Defrost mode and cabin heating use massive amounts of electricity and as Consumer Reports and AAA both recently proved, it has nothing to do with the brand. Assume you lose about half your range and you will be safe. On one trip we used 11 miles of range in the city and inner suburbs to travel 8 actual miles. This is typical of what we see in winter testing of EVs. On a cost note, we charged at the MIT campus and paid $0.99 to get that 8 miles of EV operation. Do the math and you find that using electricity does not save you money at that rate. With gas under $2.50 in our area, it is cheaper to burn recycled dinosaurs than to use electrons to push a PHEV.

Mitsubishi is one of America's lowest-volume automakers. However, in our area, there are dealers not just close to my own home, but also my fiance’s. Mitsubishi also has an outstanding warranty. 5 years, or 60K on the comprehensive warranty and 10 years or 100K miles for the first owner (which drops to 5 years 60 K for subsequent owners if the vehicle is sold). Given this warranty, and the pace of EV changes, we would look closely at leases for the Outlander PHEV and have a fixed cost of ownership over its period.

We could detail the handling of the Outlander PHEV, but it felt like any other Outlander. Smooth, but not sporty. We will say the brakes were superb with perfect pedal firmness and a very linear stopping action. There is no EV-weirdness at all.

If you are looking for an affordable crossover with outstanding features and are in an EV-targeted state with rebates and incentives, the Outlander PHEV is a slam dunk. It is currently in its own segment. One that we feel will be huge in the coming years. How cool that Mitsubishi got there first.

DeanMcManis wrote on March 12, 2019 - 4:04am Permalink
Yeah, Mitsubishi is getting a lot right with their Outlander PHEV. They are the first affordable PHEV CUV/SUV to market. They will soon be joined by others in this competitive market segment. Honda should be releasing their Pilot PHEV model later this year, and Jeep just showed off their Renegade and Compass PHEV models at the Geneva auto show, with a Wrangler PHEV slated to follow. Like the Outlander PHEV, these models will pack a lot of versatility into one vehicle.
Woody wrote on March 12, 2019 - 3:16pm Permalink
"...the Outlander PHEV is the only affordable AWD crossover with a plug for sale in this country." Don't forget the Subaru Crosstrek hybrid, although it is smaller than the Outlander. More direct competition is heading Mitsu's way in the form of Ford's next gen Escape plug in coming this September.
John Goreham wrote on March 12, 2019 - 6:22pm Permalink
Thank you for adding this Woody. Indeed, I did forget the Crosstrek.