Boston Bruin David Pastrnak has led the NHL in goals for most of this current season. This weekend, he was named the Most Valuable Player at the National Hockey League's All-Star game. Pastrnak becomes the fourth Bruin in the club's 96-year history, joining Bobby Orr, Ray Borque, and Bill Guerin. Impressive company indeed. For his efforts, Pasta was awarded an all-new 2020 Honda CR-V Hybrid AWD. One of the very first produced. The new Honda CR-V Hybrid is one of Honda's most promising new green vehicles. 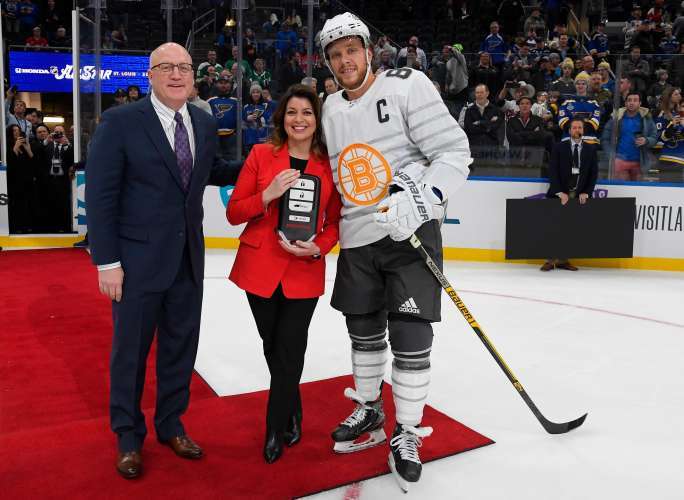 Pastrnak netted four goals and assisted on two others for six points across the two All-Star games. The first three goals and assist were all back-handed. Interestingly, Pasta's team Atlantic lost in the final round, but fans awarded him the MVP anyway. "Definitely I would expect a winner should win the MVP, the winning team," Pastrnak told NHL.com. "If it was voted in by fans, I appreciate the love. Probably wasn't any fans from St. Louis' building, but whoever voted in, I appreciate it and I appreciate the love."

Bruins fans had an extra bonus this year. Although Tuukka Rask was injured and did not attend the All-Star festivities, Bruins head coach Bruce Cassidy was the coach for Team Atlantic. Honorary assistant coach for team Atlantic Jenna Fischer (Pam from the sitcom The Office) helped out. She tweeted, "Hey @johnkrasinski look who I’m teaming up with!! We are working together to bring the Atlantic Division a WIN tonight at the @NHL All Stars Game! Tonight we put all differences aside to beat that jerk Jon Hamm! @nbc"

Hockey fans in New England have watched Pasta rise from being a Providence Bruin after his draft year to become one of the NHL's hottest stars. Those who follow "money-ball" hockey and are Bruins fans feel very fortunate to have Pasta working for the Bruins given his $6.7-million per year salary, half of what some other lower-performing NHL stars are earning.

Honda CR-V Hybrid Fast Facts
The all-new Honda CR-V Hybrid AWD is one of the few mainstream hybrid crossovers in the U.S. market not wearing a Toyota/Lexus badge. Honda plans for every model to be all-wheel drive in the American market. Torque News estimates the vehicle will earn close to a 40 MPG Combined rating from the EPA.

Image of David Pastrnak courtesy of the NHL and Boston Bruins.