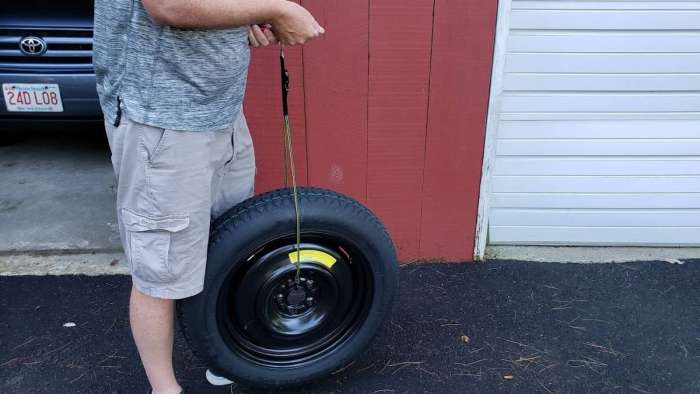 The myth that a compact spare tire adds meaningful mass to a vehicle is easily disproven.
Advertisement

Although spares are still found in every top-selling vehicle model in America, spare tires are disappearing from some new models. This is particularly true of green vehicles from many manufacturers such as Tesla which doesn’t provide a spare in any of its vehicles. New electric and hybrid vehicles like the Ford Mustang Mach-E, Hyundai Tucson Hybrid, and Volkswagen ID.4 also lack spares. Some owners assume that the lack of a spare is due to range or efficiency issues. Nothing could be further from the truth. 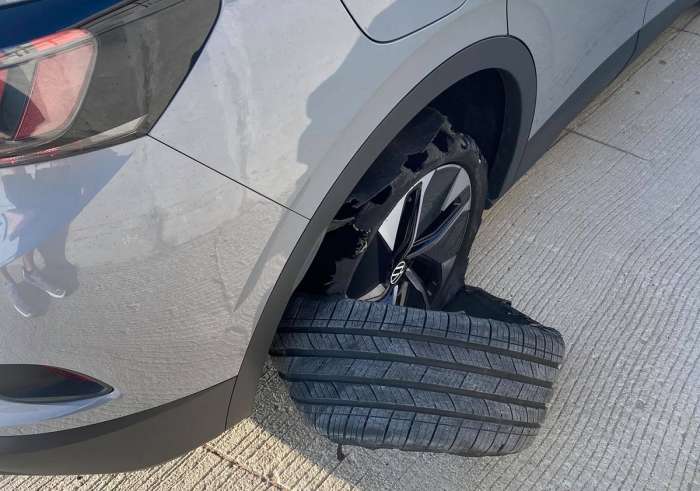 Automakers have been taking spares out of cars regardless of whether they are conventional or green. For example, our recent test of a Hyundai Kona Ultimate revealed the lack of a spare. And this turbocharged trim is the least efficient of that particular model’s trims. Some lower trims do have spares. We surmise that automakers simply want to save money when possible and boost profitability. The green vehicle movement is just a convenient segue to exploit. 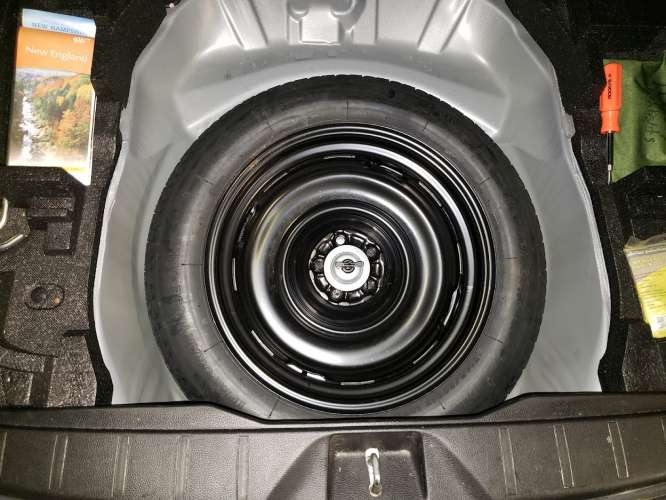 How Much Does a Spare Tire Weigh?
To see how much mass a space tire adds to a vehicle, we pulled the compact spare from our 2016 Subaru Forester. The Forester uses an old-school steel wheel with a temporary tire. It would represent the heavier of the compact spare options. It’s pretty well hidden well below the cargo floor of the vehicle. Above the spare is a cargo storage tray and above that is the cargo floor. There is no lack of cargo nooks and crannies for typical vehicle supplies.

The spare in the Forester weighed in at 38.77 pounds including a bungee cord we used to make the luggage scale work. Let’s round that to 38 pounds. Now let’s create a quick matrix of popular vehicles that lack a spare, and see what percentage of the vehicle’s mass a compact spare tire like the one in a Forester would add.

How Much Weight Does A Compact Spare Tire Add To a Vehicle?
As you can see, adding a compact spare tire to a popular electric vehicle adds less than 1% to the vehicle’s total mass. Some automobile manufacturers have taken to adding in a sealant and inflator kit in place of a compact spare. Because I test many new vehicles, I carry my own kit in a travel bag I move each week from test vehicle to test vehicle. I weighed the kit “naked,” meaning I stripped it from its carrying case and it weighed in at 9 lbs. Our chart above shows the percent of mass that a compact spare tire would add to a vehicle instead of an inflator kit. The result is roughly one-half of one percent of the vehicle’s mass. 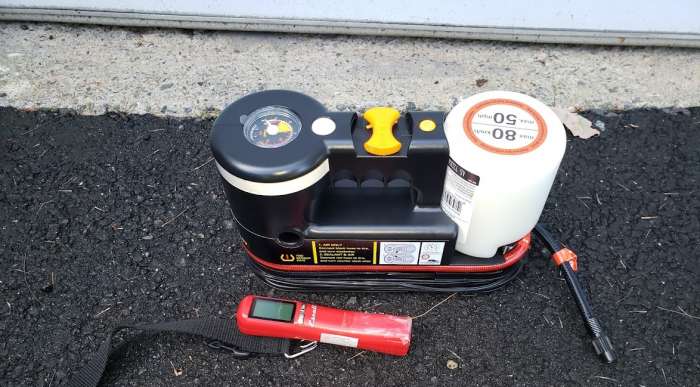 Related Topic: Why You Should Demand A Spare Tire With Your New Vehicle

Possible Range Impacts of a Compact Spare Tire
The energy needed to move a vehicle from one place to another is related to its mass. That is intuitive. However, mass is not the only factor. Rolling resistance and wind resistance also matter, HVAC uses a lot of energy, and regenerative braking recoups some energy lost while traveling. The percent difference in mass of a vehicle due to added weight would be a conservative way to gauge the possible reduction in range of an electric vehicle. Or any vehicle, for that matter.

Consider a vehicle with a 300-mile range. Reducing that range by 0.6% would mean a theoretical range reduction of roughly a mile and a half. If you own an EV and you routinely drive it to within ten miles of its maximum range, give us a shout. Your living dangerously would be a great guest story. 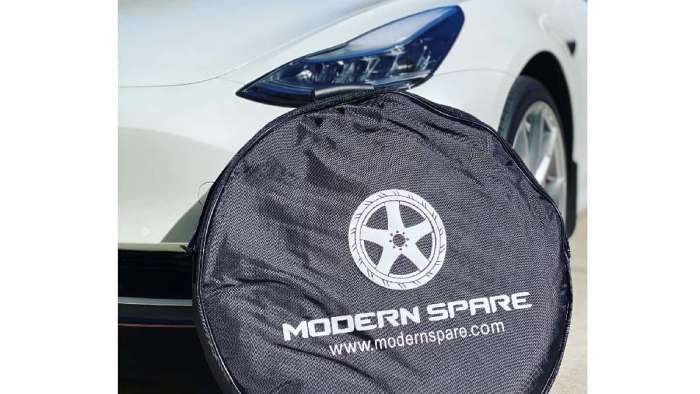 Space Considerations of a Compact Spare
Vehicle specifications for models with and without spares don’t seem to have different cargo capacities. We suspect that the sub-cargo-floor spare area is not included in the standard of measurement that is used. In any case, we estimated the volume taken up by a compact spare. Keep in mind that the middle of a compact spare is actually empty. Most automakers will store tools or a subwoofer in that space. We used the formula of a torus to calculate roughly how many cubic feet of cargo volume a compact spare takes up. We came up with 0.6 cubic feet. Consider that a typical crossover like a Model Y has a cargo volume of roughly 70 cubic feet and you can see space occupied is inconsequential.

Other Weight Additions To EVs
EVs of all brands are trending toward all-glass or mostly-glass roofs. It may seem counterintuitive, but glass roofs weigh more than aluminum or sheet steel roofs reinforced by a few cross struts. That’s why you don’t see them in high-performance track-ready vehicles like BMW M Series cars. Added mass up high is also a bad thing for handling and rollover resistance.

Premium audio systems like the 17-speaker system in the Acura TLX Type S add mass. Speakers are heavy and always use iron or steel. The Acura line actually puts some of the speakers in the roof, again, at the very highest point in the vehicle.

Concussion - It’s Silly To Suggest A Compact Spare Reduces EV Range
Our conclusion is that it is ridiculous to suggest that a compact spare tire weighing in at around 38 pounds or less has any measurable impact on the range of a modern electric vehicle. Why are some automakers designing them out of their vehicles? We suspect that it is to increase profitability. If you have an opinion on the subject of compact spares, please feel free to add it to the comments section below.

Tyler Fawkes wrote on September 10, 2021 - 11:52pm Permalink
I've been driving a EV since June 2011. I have over 100,000 miles experience driving a 100% BEV. I can promise you unequivocally every pound a EV carries costs some range. Every MPH of head wind costs some range, Every degree of cooled or warmed cabin air above or below the outside temperature costs some range. Every PSI of tire pressure below normal costs some range. EVERYTHING ANY VEHICLE CARRIES OR DOES REQUIRES ENERGY AND COSTS AGAINST THAT VEHICLE'S TOTAL RANGE. This is true of gasoline and diesel vehicles also. However, the energy density of liquid fuels is much greater than batteries, so the loss of range associated with carrying your fat ass mother-in-law around all weekend is barely noticed. The same is true of battery powered vehicles with a lot of range. But just because it's not obvious doesn't mean the effect on range (and performance) doesn't exist.